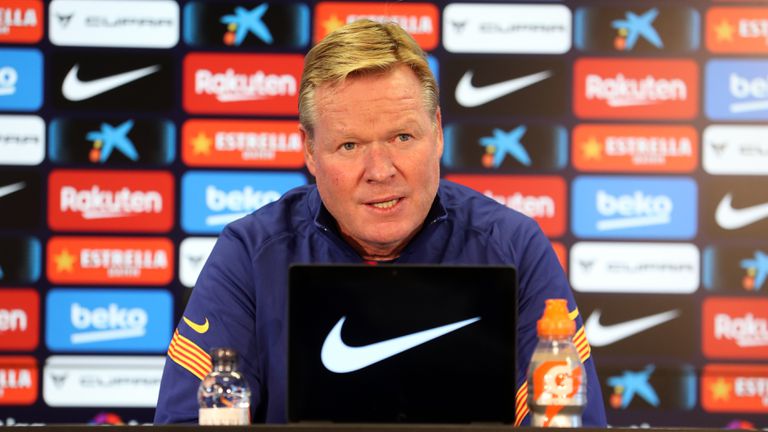 The coach of FC Barcelona, ​​Ronald Koeman, at a press conference. / Europa Press

“I can understand Leo being pissed off. After such a long journey, being asked about Antoine, I think it’s disrespectful. For your part, it is important to look for a controversy, but in the dressing room I have not seen any bad relationship between the two of them, ”Ronald Koeman started. Lionel Messi arrived in Barcelona exhausted after traveling by private plane from Peru, where he had played for Argentina in the second game of this national team break. “I’m tired of always being the problem of everything,” complained the 10th, surrounded by journalists who were waiting for him at the airport exit. It was not clear if the Rosario’s anger was in response to a question related to the statements of a former Griezmann agent, who had assured that 10 controlled everything at Barça or after the delay of an hour due to a customs control that he suffered after to land. What is clear is that Messi is not comfortable at Barcelona. Nothing new after Josep Maria Bartomeu did not let him leave for free last summer as the Rosario aspired.

Koeman, in any case, justified the captain. “I need to defend Leo, if something like this happens to me after a 15-hour flight and after having to wait another hour on the plane and when I go out there are a lot of press asking those kinds of questions, I would also have been angry” , he assured. And, regarding Messi’s decision, which in January he can negotiate with another club, he added: “I don’t see Leo outside the club. In my opinion it has to stay here, but I am not the person who has to make the decision. It is incredible what he did in this club, but it is he who has to make the decision for his future ”.

Koeman tried to be cautious about the Messi issue. However, he did need to vent about the schedule. In fact, he complained about the Barça calendar, which faces Atlético in Madrid this Saturday (9:00 pm, Movistar Partidazo), when in fact they had asked him about the national team break. “For the big teams it is a tight schedule. It is not good that they have played three games with the national teams and one of which was friendly. I have been a coach, I have not risked with a player, “he explained, and then brought the answer to his field. “What I don’t understand is why we play every game away from home at nine at night. It is not an aid to a large team that has to play every three days. I understand it with a match against Atlético, which is a great match. But don’t always play at nine. It is not good for athletes ”, he stressed.

Barcelona will not be able to count on Ansu Fati. The Barça squad, top scorer of the season (four goals) will be out for four months after having been operated on in the meniscus of the left knee. Koeman recovered Coutinho, who has already left his muscle injury behind and has Dembélé, Trincao and Pedri for the winger position. Also with Griezmann, if the Frenchman leaves the center forward demarcation. “I see Antoine concentrated, working and trying to help win the games,” he said. He also analyzed Coutinho’s situation. “Okay, he’s been training for almost a week and you have to talk to the doctors about the best time to enter, you can do it from the start or from the bench.”

Barcelona face Atlético, the only team that has not yet lost in LaLiga. “It is a difficult game, against an opponent who is difficult, with a coach who has a great career. They have their casualties, but so do we ”. The rojiblanco team has lost Luis Suárez, Torreira, Herrera and Manu Sánchez during the international break, in the case of the two Uruguayans for contracting the coronavirus during the concentration with their national team.