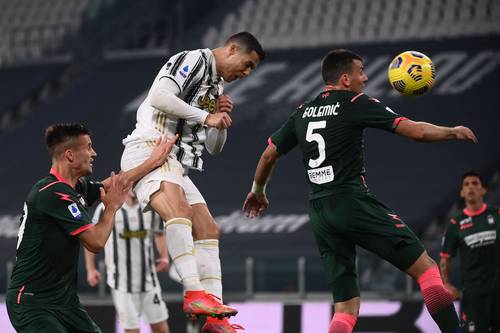 ▲ With a double scored against Crotone, Cristiano Ronaldo climbed to the top of breaking networks with 18 goals. Afp Photo

Rome. With two goals, Cristiano Ronaldo led Juventus from Turin to a 3-0 win over bottom Crotone at the close of matchday 23 of the Italian Serie A. The victory propelled the Bianconeri to third place in the standings, behind Inter Milan and AC Milan.

The Portuguese star opened the scoring at minute 38 and widened the gap just before the break (45 + 1). Already in the second half, the American Weston McKennie scored the third of the night at 66 action.

After two consecutive defeats, against Naples (1-0) on Saturday and against Porto (2-1) on Wednesday in the first leg of the knockout stages of the Champions League, Juve urgently needed to meet up with all three points and asserted his status as a favorite to crush the weak Crotone, closing in on the table to AC Milan.

The Rossoneri fell dramatically (3-0) on Sunday against Inter in the Milan derby, a result that leaves the Nerazzurri with 53 points and AC Milan with 49. Juventus, with one game less, have 45 points.

In addition to the derby, on Sunday there was a 4-2 win for Atalanta, located in fifth place – Real Madrid’s rival in the last 16 of the Champions League – over Napoli, who are in the seventh step, as well as the tie goalless for AS Roma (fourth place), in Benevento, which is fifteenth.

Crotone jumped onto the pitch yesterday without complexes, looking for counterattacks. Andrea Pirlo’s team had to be patient to find a hole in the Calabrian wall. Near the break, Cristiano Ronaldo did it by sending a good cross from Brazilian side Alex Sandro to the nets, with a powerful header.

Shortly after, the former Real Madrid player shot hard from outside the area. The Crotone goalkeeper managed to deflect the ball, which did not go over the end line, but ended up at the feet of Aaron Ramsey. The Welsh midfielder, first, centered towards the small area so that Ronaldo himself could finish it off.

With the comfortable 3-0 advantage on the board, Juve slowed down and goalkeeper Gianluigi Buffon had to incite his teammates, with shouts and slaps, asking that they not loosen marks to keep zero in his goal.