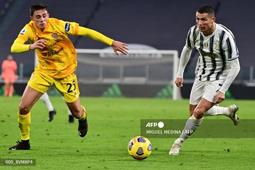 Thanks to their 2-0 win against Cagliari, Juventus (2nd) are just one point behind Serie A leaders Milan, while Cristiano Ronaldo, scorer of the two goals, equals with Zlatan Ibrahimovic in front of the scorers’ classification.

The team coached by Andrea Pirlo easily beat Cagliari (11th) with two great things from the Portuguese star: the first goal was a whip from inside the area starting from their favorite position, heeled to the left (38), and four minutes later scored the second with his heel after a header from a teammate in a corner.

With his double, Ronaldo reaches 8 goals this season in Serie A and reaches the top of the top scorers in the Italian championship to the Swedish Ibrahimovic.

‘Ibra’, however, will have the opportunity on Sunday to increase his account, in the displacement of Milan to Naples (4th), a meeting in which the Lombards could increase their advantage at the top of the table.

After the tests of the rookie in the Pirlo bench, which cost several draws to a team seeking its 10th consecutive ‘Scudetto’, the Juventine coach seems to be beginning to find a way to make his team work. “Between now and Christmas we have 10 finals to play,” the coach had warned on Friday.

And Juventus was very consistent in defense, without the fragility of the beginning of the season, and with a lot of gunpowder in attack, thanks to the good form of Ronaldo and the Spaniard Álvaro Morata, who seems to consolidate as the Portuguese’s companion up front. Piedmontese.

The good work in midfield by the Brazilian Arthur Melo and the Frenchman Adrien Rabiot and the consolidation of the young Dutchman Matthijs de Ligt in the center of defense, where the eternal Giorgio Chielini and Leonardo Bonucci are still absent, are also good news for a Juventus that on Tuesday will host the Hungarian Ferencvaros to put the qualification to the second round of the ‘Champions’ on track.

“It was a great game, which will help us in our progression,” Pirlo congratulated himself after the duel. “After the international truce it is never easy, but we have approached the game with a good attitude.”

Before, Lazio won 2-0 to their visit to bottom Crotone, reaching 14 points (7th), the same as Roma (3rd), Naples (4th) and Atalanta (5th), despite not passing the tie initial against La Spezia (12th).

On a pitch almost impracticable due to the accumulation of water, after the abundant rains of the last days in the Calabria region, Lazio took the three points, with goals from their scorer Ciro Immobile (21) and the Argentine Joaquín Correa (58 ).

With this result, Crotone collapses at bottom and still does not know the victory this season, while Lazio will have to wait the rest of the day to see if they can move up in the standings, since they started in 9th place.

Also this Saturday, Atalanta, the highest-scoring team in Italy (tied with Sassuolo, both with 18 goals), remained unmarked during their visit to La Spezia.

In reality, the Bergamo team did score a goal, when it was time to play, through the German Robin Gosens, but the referee, at the request of the VAR, annulled it for an offside of the Colombian Duván Zapata (57 ).

Gian Piero Gasperini’s team, which in recent weeks has lost some of the offensive strength it showed at the beginning of the season, will have to regain its punch if it wants to have a chance of scoring any points on Wednesday during its visit to Liverpool in the Champions League.