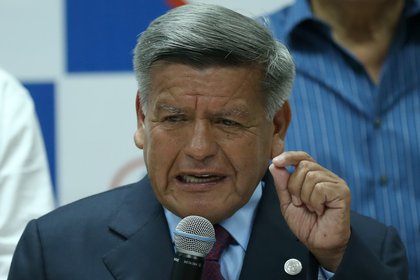 In the image the businessman César Acuña. . / Ernesto Arias / Archive

Lima, Jan 22 . .- The National Elections Jury (JNE) confirmed the candidacies of businessman César Acuña for the presidency of Peru and former president Martín Vizcarra for Congress in the general elections scheduled for April 11.
In the case of Acuña, the JNE declared founded the appeal presented by the lawyer of the Alianza para el Progreso (APP) party against a resolution that revoked his application earlier this month for not having declared the ownership of one of his properties in Lima .
The highest electoral body resolved that the candidate did not have the obligation to declare the real estate, at the time of registering his candidacy on December 22, because on the 7th of that month he had transferred it to a third person.
“Consequently, the candidate, according to the notarial accreditation that deserves public faith, would not have omitted to enter relevant information when registering his sworn statement, in the framework of the registration process of his candidacy,” the JNE indicated in the resolution published on its networks social.
JURY REVOKED ACUÑA’S EXCLUSION
In this sense, the jury revoked the resolution in the first instance that excluded the wealthy businessman and declared inadmissible the candidacies for the first and second vice presidents of his presidential formula, made up of Carmen Omonte and Luis Iberico.
The Alianza para el Progreso party had described the decision of the Lima Centro Special Electoral Jury as “totally arbitrary and unfair”, considering that “it has not assessed the transitory norms”, which establish that “the responsibility to obtain public information from the registries It’s from the JNE. “
Acuña, who owns several private universities and whose party was one of those that promoted the removal of former president Martín Vizcarra, had assured that they would appeal his exclusion from the campaign and that he would hope “that they will apologize to the people.”
62% REJECT ACUÑA
The presidential candidate has one of the highest anti-vote percentages, with 62%, while his proposal has not yet found its way into the electorate’s preferences, despite the fact that he is one of the few that is campaigning in person in different regions.
Precisely, in a proselytizing act in the Andean Cajamarca, a man shouted “coup” and that “he does not care about the country”, when he was leading a mobilization in that city this Friday.
In the previous 2016 election campaign, Acuña was out of competition after the JNE unanimously decided to exclude him for having given money to citizens during his election campaign, which is prohibited by law.
VIZCARRA CONTINUES RACE TO CONGRESS
In other resolutions issued this Friday, the electoral jury rejected two strikeouts presented against the candidacy of former President Martín Vizcarra to Congress by the Somos Peru party, thus enabling him to continue with his campaign.
The strikeouts were presented by former congresswoman Yeny Vilcatoma and citizen Mónica Yaya on the assumption that Vizcarra had not complied with resigning the presidency six months before the elections, as a requirement to be able to present his candidacy.
However, the JNE pointed out that the electoral legislation does not consider the President of the Republic among the officials who must meet this requirement to run in the general elections.
In addition, he recalled that Vizcarra was removed from office last November and that it was only at that time that the possibility of running for election could have been considered.
RAISE POSTPONING COMES
Vizcarra is the number 1 candidate to Congress for We Are Peru, with which his chances of entering Parliament are quite high, but in view of the second wave of infections by covid-19 in the country, he has proposed that the elections be postponed until may.
“If instead of April 11 we run the elections for the first round on May 23, we will be in this area where there is the confidence of the population. If we want to take care of health and strengthen democracy so that there is massive assistance We have to run the elections for a month and a half, “proposed Vizcarra.
According to the ex-president, the postponement that he raises would not affect the date of the assumption of the new government and Parliament, which is July 28, the day on which the bicentennial of Peru’s independence will also be celebrated.