The filming of ‘Jurassic World: Dominion’ ended in November 2020 after many problems caused by COVID-19, pushing back its release date from 2021 to June 10, 2022, but it seems it’s time to open your mouth and Sam Neill has been in charge of launching the first teaser poster of the film on his Twitter account next to the phrase “Here we go!” (“Here we go!”). The image stars a mosquito drinking blood from the skin of a dinosaur, which takes us back to the origins of the saga, and has the phrase “it all started here.” On the poster you can also read that the first images of the film to be released alongside the screening of ‘Fast & Furious 9’ only in IMAX format.

According to the press release, what will premiere alongside Vin Diesel’s film will be a five-minute prologue scene set 65 million years ago, during the Cretaceous period, when dinosaurs ruled the entire planet. The images will include part of the soundtrack by Michael Giacchino and “will reveal what the Earth was like long before humans existed and will tell the origin story of how the DNA of dinosaurs first came to be transported by an already mythical mosquito. “. Additionally, the footage will introduce “Seven new species of dinosaurs, created by the legendary Industrial Light & Magic, that have never been seen in any ‘Jurassic’ movie before. ” Its director describes it as “an epic celebration of all that Steven Spielberg and Michael Crichton created.”

Universal Pictures has also revealed a new image for the film in which a feathered dinosaur appears for the first time, that it could be an evolution of the dinosaurs in the wild or it could be one of the nine species that we will discover in the prologue. 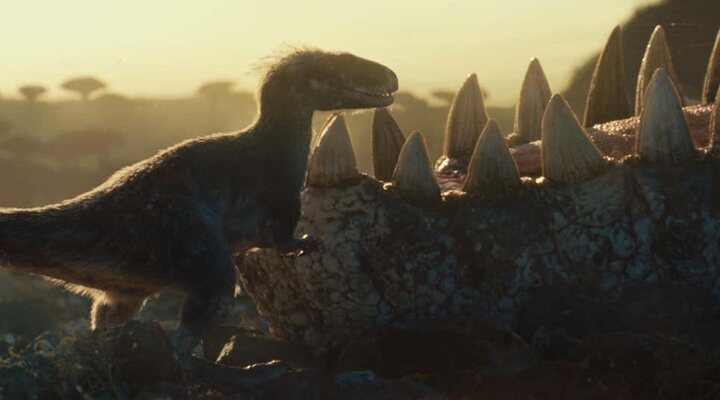 ‘Dominion’ will be the third installment of the ‘Jurassic World’ saga and the sixth of the ‘Jurassic Park’ franchise and since the project was announced it was revealed that they would return to their characters Neill as Alan Grant, Jeff Goldblum as Ian Malcolm and Laura Dern as Dr. Ellie Sattler. What we did not know and just revealed its director, Colin Trevorrow, is that they will not cross paths with Chris Pratt and Bryce Dallas Howard, since the film will tell two parallel stories: “We tell two parallel stories that get closer and closer, and you understand it, you begin to understand how they are going to intersect and they do it. But that’s not a traditional way of structuring a movie … You don’t want to let anyone down … Laura, Sam and Jeff are as much a part of the movie as Chris and Bryce are in terms of screen time, in terms of to its importance in the story, everything, “he told Collider. What is clear is that in ‘Dominion’ all the characters will have to deal with the consequences of the end of ‘Jurassic World: Fallen Kingdom’, where we saw how the dinosaurs They have spread across the planet after escaping from the islands, with Jake Johnson, Dichen Lachman, BD Wong, Daniella Pineda and Omar Sy, among others, in the cast.