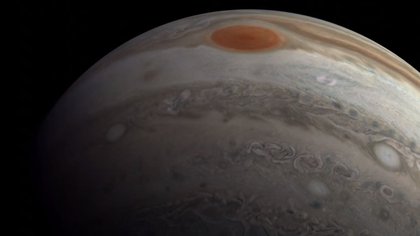 In what will be a historical event for astronomy, in mid-December Jupiter and Saturn will appear so close together in the night sky that they will simulate being a double planet, something that has not happened since the Middle Ages.

“The alignments between these two planets are quite rare, they occur once every 20 years or so, but this conjunction is exceptionally rare due to how close the planets will be to each other,” the Rice University astronomer said in a statement. Patrick Hartigan. “We would have to go back until just before sunrise on March 4, 1226, to see a closer alignment between these visible objects in the night sky,” explained the specialist.

Jupiter and Saturn have been closing in on Earth’s sky since the middle of this year, but on December 16-25, the two will be less than the diameter of a full moon apart.

“On the night of closest approach, December 21, they will look like a double planet, separated by only one-fifth the diameter of the full moon,” said Hartigan, a professor of physics and astronomy. “For most telescopes, each planet and several of its largest moons will be visible in the same field of view that night “added.

Although the best observing conditions will be near the equator, the event can be observed anywhere on Earth, if the weather allows it. Hartigan specified that the planetary duo will appear low in the western sky for about an hour after sunset each night.

“The further north a viewer is, the less time they will have to glimpse the conjunction before the planets sink below the horizon,” the professor noted. Fortunately, the stars will be bright enough to be seen at twilight, which may be the best time for many American viewers to observe the conjunction. 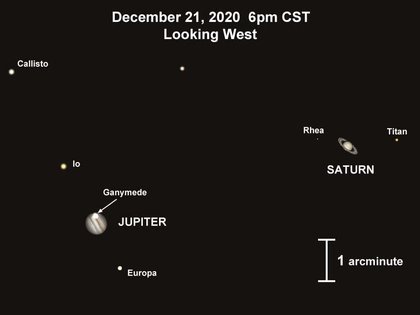 “By the time the skies are completely dark in Houston, for example, the conjunction will be only 9 degrees above the horizon,” Hartigan said. “Seeing that would be manageable if the weather cooperates and you have a clear view to the southwest,” he clarified.

But an hour after sunset, people looking up at the sky in New York or London will find the planets even closer to the horizon, at about 7.5 degrees and 5.3 degrees respectively. Spectators there, and at similar latitudes, would do well to catch a glimpse of the rare astronomical sight as soon as possible after sunset, he said.

Those who prefer to wait and see Jupiter and Saturn so close and higher in the night sky will need to stay until March 15, 2080.Hartigan warned. After that, the couple will not make such an appearance until sometime after the year 2400.

During the summer months in the northern hemisphere, Jupiter and Saturn have been the great protagonists of the celestial vault. The two largest planets in the solar system have stolen all eyes, with a brightness that stood out in the dark sky, and with continuous games in which they approached the Moon on the horizon from time to time.

On Wednesday, September 23, for example, the two gas giants aligned themselves with the terrestrial satellite, repeating one of these beautiful spectacles that have fascinated astronomy lovers in previous months.

“Ultrahot Jupiter”: they discovered one of the most extreme exoplanets known