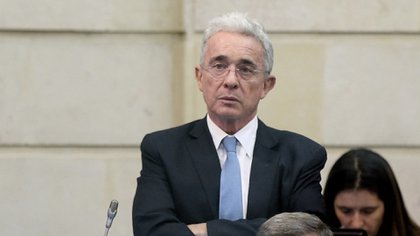 New evidence removes the case of former president Álvaro Uribe and that of his former lawyer, Diego Cadena. These are seven sim cards that, according to the accusing entity, could show the existence of calls and data that could give more clues in the case of bribery of witnesses that both face.

This was reported by the newspaper El Tiempo in one of its most recent investigations, where it confirmed that it was closely acquainted with the decision of Judge 47 with the function of controlling guarantees, who is currently handling the case, for three cell phone companies in the country to review and deliver the text messages, audio, call logs and text messages, which are compromised with seven sim cards found in Juan Guillermo Monsalve’s cell and which could give new data in the investigation that accuses the former president and his former lawyer of the crime of witness tampering.

According to the information known to El TIempo, the prosecutor Gabriel Jaimes already knows the content of these conversations and therefore requested that they be added to the case and to Monsalve’s file as “Relevant evidence”.

The media also assured that they found a list of contacts that would indicate with whom Monsalve was constantly speaking, find call records and possible conversations with people involved in the case, such as that of Tavo Molina, a man who, according to the outlet, He is reported to have exerted pressure so that a farm, which is called ‘La Veranera’, located in Apía, Risaralda, was left in the hands of Monsalve’s ex-wife. Among the telephone companies that will have to collaborate with the investigation are Claro, Tigo, Éxito, Movistar and Avantel.

Juan Guillermo Monsalve in an interview on the Uribe case

Sim cards have been on the radar of the Supreme Court of Justice since the security measure was issued to Álvaro Uribe Vélez, in August 2020. However, they have been in the hands of the authorities since January 2020, when the cell of Juan Guillermo Monsalve, the son of the butler of the Guacharacas farm, which belonged to the Uribe Vélez family.

In addition to the name of Tavo Medina, forensics hope to be able to verify if there is a record of conversations with alias Caliche (Carlos López), accused of having contacted Monsalve to modify his version in the investigations that are being carried out in the Uribe case.

Likewise, it is expected to find a record of calls or communications with Ricardo Williamson, brother-in-law of the convicted Enrique Pardo Hasche, who is also considered a key witness in the Uribe case, and who has previously been accused of false testimony.

According to what the newspaper reported, In December 2017, Williamson met with Vicky Jaramillo, a former Congress of the Republic official and political advisor, also accused of giving false testimony, to insist that they send a lawyer to listen to Monsalve.

Iván Cancino, Diego Cadena’s lawyer, asked to postpone the hearings against his client, which allowed the new meeting date to be April 14. Cancún, then, will have two months to study the 172 gigabytes of information in order, according to El Tiempo, to achieve its mission of revoking the assurance measure under which Cadena is subjected.

For his part, Senator Iván Cepeda assured that now the Prosecutor’s Office is investigating him and the witness, instead of continuing with the process against Uribe.

Tired of insecurity, Bogotans beat a thief and threw him into the Fucha river