Imanol Uribe (‘La fuga de Segovia’, ‘Das counted’) is back behind the scenes to direct an exciting script based on the true story of the only witness to the massacre of the Jesuits in El Salvador, in which he was assassinated the priest and theologian of liberation, Ignacio Ellacura.

Narrated in the tone of a thriller, the film that captures the events that overwhelmed an entire generation is, beyond its political and social background, a story of characters, of their struggle for truth and justice in a country at war and of his eagerness to overcome that moment of horror.

Juana Acosta gives life to Luca, the cleaning employee who fortuitously witnessed the massacre without the assassins noticing her. An anonymous and brave woman determined that the truth prevails. Along with her, the Colombian Juan Carlos Martnez in the role of her husband and loyal traveling companion.

Carmelo Gmez incarnating Father Tojeira, the other living protagonist in history, always ready to seek understanding, in defense of truth and justice. Tojeira himself has collaborated in the process of writing the script, providing precise details that contribute to building a story faithful to what happened those days.

And Karra Elejalde be Father Ellacura, the Basque priest who, together with his companions from the Society of Jesus, proclaimed the theology of liberation, giving voice to the most disadvantaged, facing both the guerrillas and the ferocious military dictatorship that ruled the country. at that time.

With a script by Daniel Cebrin, written after an exhaustive work that has involved several years of documentation, the history of ‘Luca’s look’ becomes fully topical after the trial held last September at the National Court and in which the former colonel and former Vice Minister of Public Security of El Salvador, Inocencio Montano, one of the Salvadoran military implicated in the crime, extradited to our country by the US three years ago, he was sentenced to 133 years and 4 months in prison for the murder of the Spanish Jesuits that night from November 15 to 16, 1989. However, on the other hand, the filming coincides in time also with the annulment, by the Criminal Chamber of the Supreme Court of Justice of El Salvador, of the criminal proceeding against the alleged masterminds, declaring its nullity and reaffirming the definitive dismissal of the accused.

Meanwhile, the only witness to the events remains outside El Salvador in a discreet place that he still prefers not to make known, where he has remade his life.

“My birth in El Salvador, my education with the Jesuits and the admiration I felt for Ellacura and her group are at the origin of this film,” affirms the director, winner of a Goya.

The script has the approval of the Jess Company, which has advised producers both from Spain and from El Salvador in recent months. We took Uribe’s idea of ​​making this film with great illusion. The important thing about the project is that it invites us to remember. Unless we fall into oblivion of what happened in 1989 and what has been happening in many places in Latin America and Central America, which is the persistent experience of injustice and violence and that still today, the Company of Jesus tries to respond to Through the institutions it has in those countries, the provincial of the Company in our country, Antonio Espaa, said, who visited the filming the same day it started.

“I have been preparing this project for several years, which had to be suspended last spring when we were going to start filming in Colombia. Now, despite being immersed in this second wave, we have started with even more enthusiasm and the work flows smoothly. We are some privileged ones “points out Imanol Uribe, consulted about the peculiarities of filming conditioned by the COVID protocols.

Produced by Bowfinger International Pictures, Maria Luisa Gutirrez, Tornasol Films and Never Say Never AIE and co-produced by the Colombian 64A Films, the film begins its filming in Navarra, facing the second wave of the pandemic, with intense health security protocols , to continue in Colombia. The South American country will host a large part of the plot, given the difficulty involved in shooting this story in Salvador itself.

‘Luca’s look’ It has the participation of RTVE and Movistar + and the support of ICAA and IBERMEDIA.

In the early morning of November 16, 1989, in the midst of the Salvadoran civil war, six Jesuit priests, university professors, and two female employees were assassinated at the Jos Simen Caas Central American University (UCA) in San Salvador. The news has an immediate international repercussion, because in addition to the barbarism, among the murdered priests is a prestigious intellectual, Ignacio Ellacura.

The position of the Jesuits of the UCA was unbeatable to mediate a foreseeable peace agreement and their flawless disposition, the ideal tool to end a decade of bloody war.

The government immediately blamed the FMLN guerrillas, but an eyewitness overthrew the official version. His name is Luca Barrera De Cerna and he works as a cleaning employee at the UCA. She has seen who the real killers are: the army. That look will be key to clarify the truth and do justice, but also change his life and that of his family forever. 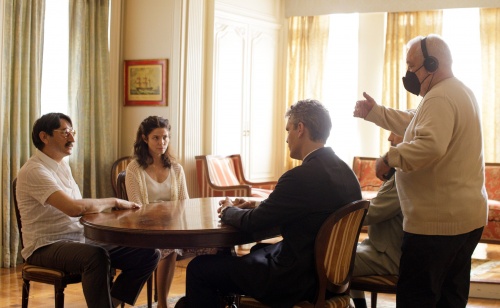