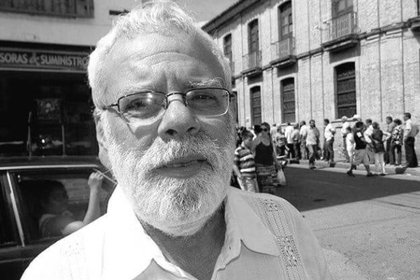 Jorge Solano was a social leader in Ocaña, Santander. He worked for more than forty years against corruption and the defense of the victims of the armed conflict. He was president of the Organization of Victims of Forced Disappearance and as a delegate of the Ocaña Victims’ Table.

On November 3, he was assassinated by hitmen who shot him twice at the door of his house. Six months before his death, Solano, through his social networks, published a video in which he warned who could be the protagonist if something happened to him.

By that time, that is, by early 2020, Solano was investigating the monies of the contracts made by the director of the Emiro Quintero Cañizares Hospital, where he found that there were irregularities in five contracts that had the signature of former manager Pinzón.

For this reason, Solano published the video that said: “You could not with threats, you could not with bribery, and surely you will not be able to do so through the courts. He has only one way left, that of weapons, that of murder. Whatever happens to me, we already know who it can be.

According to the information from the investigation that the Prosecutor’s Office is conducting, Pinzón, beyond being identified as the intellectual author of the murder of the Santander leader, is linked to the conclusion of five contracts in which it is said that $ 938 million would be allocated to the maintenance and infrastructure of the medical center. The hospital’s board of directors was never aware of these contracts.

On the other hand, The former manager also participated in the conclusion of six contracts for the supply of surgical material, allocating a budget of $ 1,175 million. And finally, again, directly, Pinzón appears in nine contracts and a purchase order for the supply of medicines.

We suggest you read: There are cases of ‘false positives’ that have not been reported, says one of the Mothers of Soacha

One month after the fact The Superintendency of Health intervened the medical center and found 87 administrative, financial and healthcare deficiencies that posed a risk, for patient care and for physicians and health officials.

In the said intervention it was identified that In the vast majority of contracts that Pinzón had signed, there were family ties between the favored providers. According to the Superintendency, 40% of the budget allocated for 2020 was concentrated in six contractors.

Faced with the case of the murder of Jorge Solano, the former manager assures that he has nothing to do with him and that, in fact, He was “the first to reject these acts”, since he experienced violence firsthand when his father was murdered. In addition, through a statement, he assured that the social leader never sued him, while Pinzón did present claims for libel and slander. “I never had a dialogue with him, not even through a third party.”

In that same statement, he stated that he is not a relative of Carlos Pinzón, one of those arrested for the murder of Solano, and that he has already made himself available to the Prosecutor’s Office to make clarifications as soon as possible.

Last February 16 The Prosecutor’s Office reported that a guarantee judge imposed a security measure in a prison on the two alleged perpetrators. They are Carlos Daniel Pinzón Ramírez and Luis López Delgado, accused of aggravated homicide, as co-authors; for manufacturing, trafficking, carrying or possession of firearms and for aggravated conspiracy to commit a crime. According to General Jorge Luis Vargas, director of the Police, one of those involved is the cousin of the former hospital manager.

Finally, it was learned that last year, in November, they captured alias the ‘donkey’, named Jhon Freddy Espinosa, who had been the material author of the murder of Jorge Solano. According to the evidence available to the Prosecutor’s Office, everything indicates that the hit men received $ 40,000,000 for executing the murder, and that Carlos Pinzón It was allegedly in charge of hiring the perpetrators and obtaining the weapon, while López watched the victim before and after the attack.