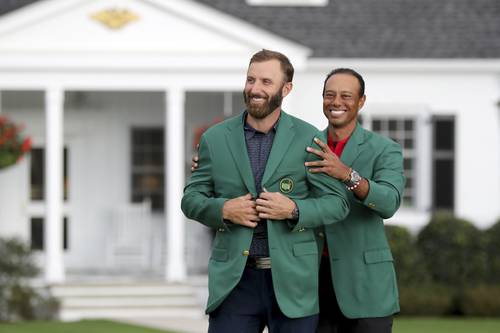 ▲ Tiger Woods, who conquered the previous edition of the Augusta Masters, presents the green jacket of winner to Dustin Johnson.

Augusta. From start to finish, that’s how golfer Dustin Johnson dominated to conquer his first Augusta Masters with the best score (20 under par) in the history of this iconic Grand Slam tournament, where rookie Abraham Ancer had a bad day and, a second place he started with, he finished in 13th place, the best result for a Mexican.

The American, who has won the second Major trophy of his career, became the first number one in the world to triumph at the Augusta National since Tiger Woods in 2002.

Johnson finished with a par at the 18th hole to finish the last round four under par and 68 strokes, for which he signed a card of 268 strokes, 20 under par, surpassing by two strokes the record set by Woods in 1997 and equaled by Jordan Spieth in 2015.

His five-shot lead win was the widest since Tiger won 12 to set the 1997 mark. The only thing missing was the shouts on the decisive start putts on the final nine holes that sealed the victory for the golfer from 36 years.

The Masters, which was postponed from April due to the Covid-19 pandemic, had to be played without fans for the first time. Still, Johnson had a warm reception on the 18th hole from club members and their wives, partner Paulina Gretzk, as well as some champions.

Johnson’s four-shot lead was reduced to one after five holes, but he quickly regained control. Cameron Smith and Sung-jae Im were the only ones who really gave him a fight, they had 69 shots, one more than the American, to sign a total of 273 hits, 15 under par.

The Australian had a perfect consolation. He became the first player in Masters history to have four rounds of under 70 strokes, but all he got was second place.

Johnson became the 12th non-disadvantaged Masters champion after one round and in the final round with 68 he broke another record from Woods, who defended the title and finished 38th with the highest score of his career.

It’s an incredible feeling, I played fantastic golf. Having the record of 20 and that of 72 holes is a great honor. It was the tournament I always wanted to win, said the brand new champion before putting on the green jacket that Woods gave him.

The Spanish Jon Rahm, number two in the world, finished in the group in seventh position and the Mexican Abraham Ancer, who started the last day on the second step, fell to 13th place, in his debut in this Grand Slam.

Ancer, 21st in the world, made four bogeys in the first seven holes and concluded with a 76-stroke card, four over par, while Colombian Sebastián Muñoz finished in 19th place.

El Turco concluded with 280 impacts after four days of competitions in which he fought and was even in front of the board to close the best performance of a Mexican, after Antonio Cerdá (24) in 1961, who was born in Argentina and played with the tricolor flag by registration of the organizers, Espn reported.

He will return to this contest next year in its 85th edition accompanied by his compatriot Carlos Ortiz, winner of the PGA Houston Open, the week before.