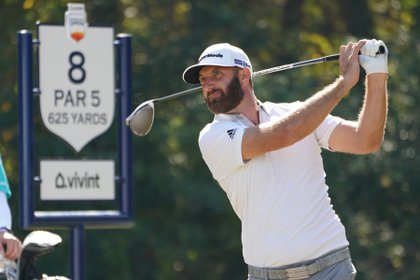 In the picture, the golfer Dustin Johnson. . / EPA / RICHARD CARSON

Houston (USA), Nov 15 . .- The arrival of the cornavirus pandemic completely changed the development of professional sports in the United States by first forcing the complete suspension of all competitions, then doing it without fans and also have dozens of athletes infected with COVID-19.
Among them were golfer Dustin Johnson and first baseman for the Atlanta Braves, baseball player Freddie Freeman, who not only survived the deadly disease but also achieved the most important triumphs of their respective professional careers.
Johnson, 36, the current world number one, was going to live this Sunday his consecration among the greats of golf by winning his first title at the Augusta Masters, the second of the “majors”, just over a month after having tested positive for COVID-19, which caused him to miss two PGA Tour tournaments.
The loss due to the forced quarantine, in no way, affected Johnson’s game, that if last Sunday, he was close to getting the title in the Houston tournament, at the Augusta National Golf Club, he gave a whole magic recital with his blows that allowed him to wear the traditional green jacket, accompanied by new historical brands.
Johnson’s 72-hole total (268, -20) broke the Masters record of 270 set by compatriot Tiger Woods in 1997 and tied by fellow American Jordan Spieth in 2015.
Johnson also had the fewest bogeys (four) of all in tournament history. His final round marked Johnson’s 11th in a row under par at Augusta National, breaking the record set by Woods in 2000-02 with 10.
Johnson’s big win at the Masters came to him on his 10th attempt after finishing in the top 10 in each of the previous four tournaments, including a tie for second behind Woods last year, which left him rife with frustration. and questions about their ability to know how to define in decisive moments.
Johnson had his own demons to conquer on Sunday. It was the fifth time he had held a 54-hole lead in a major championship; he was defeated the first four times.
More recently, his compatriots Brooks Koepka beat him at the 2018 US Open in Shinnecock, and young Collin Morikawa did the same in the PGA Championship, at TPC Harding Park, last August.
But above all, the native of Columbia, South Carolina, about 153 kilometers northeast of Augusta, saw fulfilled the great dream that he always had as a child when he started playing golf and that it was none other than winning the Masters, the most symbolic of all the “elders”.
That dream came true Sunday for a player who is arguably the most talented of his era and arguably the most athletic, something that helped him easily defeat COVID-19.
Plus, after so many disappointments, Johnson also has one of the best resumes in golf history, already having 24 PGA Tour titles under his belt.
More difficult and dramatic was Freeman in his battle with the deadly disease COVID-19 and then becoming the Most Valuable Player (MVP) of the National League.
Three weeks before the delayed regular season kicked off in late July, Freeman’s body temperature rose to 40 degrees Celsius (104.5 Fahrenheit).
The 31-year-old player lost his sense of taste and smell, which began to be his biggest health nightmare, having contracted COVID-19, and that at one point led him to think that it was the end of his life .
He got so bad that he implored God: “Please don’t take me away.”
Little by little he was able to overcome the contagion and when he returned to the diamond the aftermath of the difficult stage he experienced was being left behind with a performance that not even Freeman himself expected.
“I wasn’t ready,” Freeman admitted after receiving the news of the award. “I got off to a slow start. I just didn’t know when my leg strength would get back.”
But Freeman made an astonishing recovery. He hit .341 with 13 homers and 53 RBIs in 60 games, in which he always demonstrated the power of a left-handed hitter with the ability to place the ball anywhere on the ground, and which allowed him to lead the majors with 23 doubles and 51 runs scored.
Their resurgence, like Johnson’s, makes them the symbolic athletes who won the battle against a virus that has already claimed the lives of nearly a million and a half people around the world.
Sonia Salazar