It seems that the many delays caused by the health crisis are not going to prevent Hennessey Performance from presenting what they call the first production copy of the new Hennessey Venom F5. This should have already been revealed and still does not have a specific presentation date, but John Hennessey has confirmed that the copy has already been manufactured and that it will be unveiled in the coming weeks.

One of the presentations of the year will be the new Hennessey Venom F5. Another of the models created to compete for the title of the world’s fastest production sports car, or that is at least what those responsible for the company have told in the 6 years that they have been announcing this project.

Following numerous teasers, Hennessey Performance unveiled the first images of the final model in late 2017, unveiling a scale model that did not have a finished interior or final specs but was shown publicly at numerous events around the world, such as the SEMA Show in Las Vegas or the Geneva Motor Show. Since then, the Texas company has been shelving the specifications and details of the model with small announcements as a teaser, including the presentation of the final version, which the company defines as “production” although the truth is that it is only the first functional copy and that it is also intended to carry out the first tests of the model. 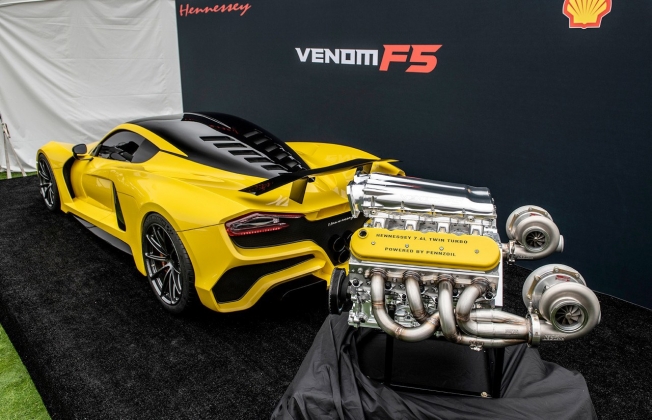 The new Hennessey Venom F5 alongside the V8 Fury engine.

This first prototype with its final configuration was to have been presented in the summer, during the parallel events to the Pebble Beach Concours d’Elegance. However, as we already know, these events were completely canceled, leaving the company waiting for another occasion for the presentation. This had been organized for this month of November, but for various reasons the event could not be organized either.

In a recent podcast appearance, John Hennessey has confirmed that despite this latest delay they still plan to unveil the model before the end of the year, which leaves us a margin of approximately a month and a half for said presentation. For now there is no date assigned.

Aspiring to the title of fastest in the world

The new Hennessey Venom F5 is not like any other limited edition sports car, as it has theoretically been developed to pick up the baton and elevate the performance of its predecessor, the Hennessey Venom GT. The new model no longer uses a modified chassis from a Lotus but an advanced carbon chassis that weighs just 86 kg but features a torsional stiffness of 52,000 Nm, which exceeds the specifications of the carbon monocoque of the Bugatti Chiron itself. Although the star of the set is going to be the impressive supercharged 6.6-liter V8 Fury, which according to the latest official figures announced delivers no less than 1,842 hp (1,817 hp) and 1,617 Nm of maximum torque. Hence, Hennessey’s intentions are to achieve the first homologated speed record exceeding 500 km / h. A feat that Bugatti and SSC North America have already tried unsuccessfully, although for various reasons they failed to homologate their tests.