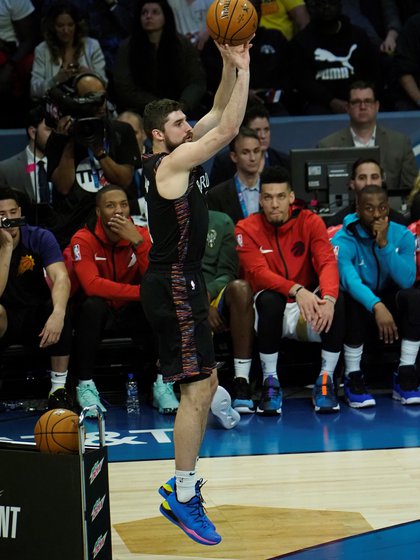 In the photo, forward Joe Harris, who agreed to a four-year contract with the Brooklyn Nets. . / EPA / JOHN G MABANGLO / Archive

New York, Nov 20 . .- Forward Joe Harris agreed on Friday as a free agent to a four-year, $ 75 million contract that will allow him to continue with the Brooklyn Nets.
This was reported by his agent Mark Bartelstein, from the firm Priority Sports.
Harris, 29, averaged a career-high 14.5 points per game last season for the Nets, hitting 42.4 percent from 3-pointers.
Harris’ return, along with the additions of Landry Shamet and Bruce Brown in trades earlier this week, could help the Nets give stars Kevin Durant and Kyrie Irving more support within the team.
But Harris’ signing represents a financial commitment, as the Nets are already at the threshold and still have some unfilled positions on their roster.
Harris resurrected his career with the Nets for the past four years, emerging from a season-ending injury in his sophomore year with the Cleveland Cavaliers in 2015-16, and going on to become one of the world’s best 3-point shooters. of the league.
Among 208 players who have tried at least 400 3-pointers since the start of 2017-18, only Seth Curry, new to the Philadelphia Sixers, has a higher 3-point shooting percentage than Harris.