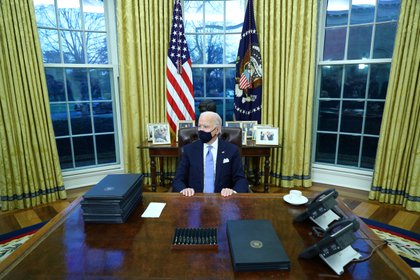 The President of the United States, Joe Biden, On his first day as head of the Executive Power, he signed 17 decrees that reverse the policies of his predecessor, Donald Trump. These include actions related to climate change, immigration, racial justice and the pandemic.

Specifically, Biden determined the return of the United States to the Paris Agreement, the main multilateral instrument in the fight against climate change, and lifted the ban on flights of certain predominantly Muslim countries.

In his first contact with the press from the Oval Room, Biden affirmed that the country “will return to the Paris Agreement as of today.” “We are going to combat climate change in a way that we have not tried until now,” he said.

It also required the use of face masks “where I have authority” and the need to maintain social distance on federal government property. And it canceled the process of disassociation of the World Health Organization (WHO), announced by Trump in the middle of the pandemic. About this he referred Jen psaki, Biden’s press secretary, this Wednesday afternoon during his first press conference: “For a hundred days you will have to wear the mask, it is a presidential decree and the exclusion of the United States from the WHO is revoked.”

The spokeswoman announced that this Thursday Dr. Anthony Fauci, chief epidemiologist at the White House, will hold a virtual meeting with the WHO authorities. 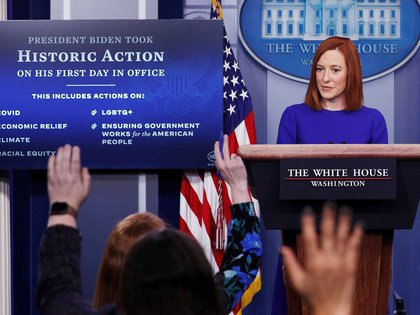 The incoming government had already anticipated its willingness to carry out these actions before taking office. A memo of the chief of staff of Joe biden, Ron Klain, addressed to the top officials of the new Democratic administration, said the goal was to address “four crises that overlap and worsen: the COVID-19 crisis, the resulting economic crisis, the climate crisis, and a crisis of racial equality”. All, he stressed, “require urgent action.” That’s why as soon as you take office, and for the first week to 10 days, Biden will take “Decisive measures” against the four and also “to prevent other urgent and irreversible damage and restore the United States’ place in the world”.

Psaki maintained that the coronavirus triggered “an unprecedented housing affordability crisis.” Faced with this scenario, Biden “took action and requested that the moratorium be extended.” Likewise, the spokeswoman for the US president remarked that “difficulties in student loans increased”, so the head of state “extended the pause in the payment of student loans and interest.”

Klain – who was chief of staff during the Biden’s vice presidency and coordinated the response to Ebola appointed by Barack Obama– mentioned the legacy of the outgoing president: “President Biden will act not only to reverse the more serious damage from the Trump administration but also so that the country begins to progress ”. 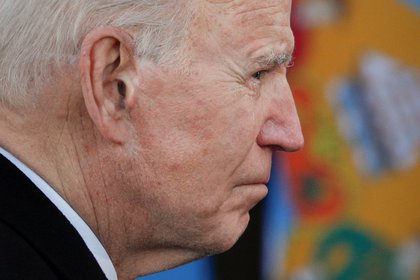 Biden assumes – expressed his chief of staff – in the middle of “four crises that overlap and worsen: the COVID-19 crisis, the resulting economic crisis, the climate crisis and a crisis of racial equality.” (REUTERS / Tom Brenner)

These measures also aim to create a political work climate to which the Congress, which was also in democratic hands, with those other issues that require legislative action. Before the end of January, Biden will also present proposals on Capitol Hill, according to Klain, such as “the immigration bill that you will ship on your first day in office; the recovery proposal for create millions of well-paying, unionized jobs that will be released in the coming weeks and its continued support to norms on the right to vote, the minimum wage and the fight against violence against women”.

Psaki explained that the bill that Biden will send to Congress regarding immigration will have the objective of “Provide hardworking people who have been here for decades a path to citizenship.” Regarding the construction of the wall on the border with Mexico, he commented that the president will try to stop its financing.

In addition to the two measures mentioned, another decree prevents foreclosures and evictions generated by the COVID-19 crisis and imposes the use of masks on interstate travel and inside federal buildings. It also extends the moratorium on payments to credits for university education, which constitute a significant debt that students take, along with the degree, upon graduation.

While Klain acknowledged that the “Full compliance” with the new government’s political agenda requires Congress to pass a $ 1.9 trillion aid law and that an immigration plan also requires a parliamentary reform, several other actions can be promoted by orders of the executive power and meanwhile benefit many people: according to the memo, for example, more than 25 million Americans are at risk of homelessness because of the crisis. 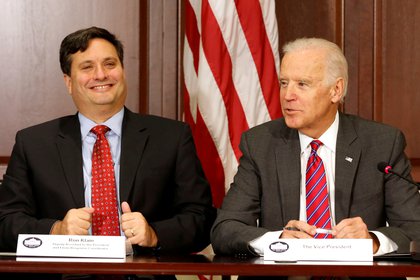 Ron Klain, the chief of staff of the new US president, fulfilled that same role during Biden’s vice presidency and coordinated the response to Ebola appointed by Barack Obama. (REUTERS / Larry Downing)

“I want to be clear: the legal theory behind the decrees is well founded and represents a restoration of a proper and constitutional role of the president”, Wrote the chief of staff. He thus alluded to the fact that many of the Executive orders Trump issued were challenged in court (some were blocked) as Biden himself stressed their limits during the 2020 campaign: “You cannot do much with decrees. It is necessary to generate a consensus ”.

With a tight senate (48 Democrats, 50 Republicans and 2 independents who for electoral purposes compete within the new ruling party, Bernie Sanders and Angus King) Biden will have to work hard to get the Republicans don’t block the legislation, particularly as Democrats pushed for the impeachment Trump. Many have already questioned the need for greater financial aid to citizens (the second check recently approved by Congress was for $ 600) and have spoken out against increased federal spending.

Biden is also expected to create a path to citizenship for some 11 million undocumented immigrants; to restore legal status – and also reinstate the path to citizenship – to hundreds of thousands who were under the protection of Deferred Action for Childhood Arrivals (DACA) because they entered illegally while they were minors, taken by their parents. “Probably also cover certain essential frontline workers, many of whom are immigrants, “added Cloud. 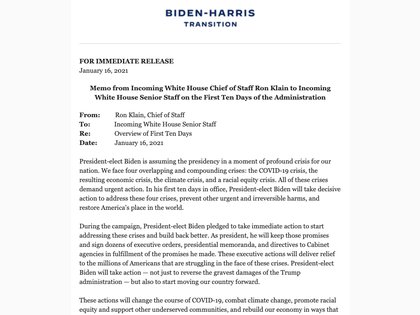 According to the Ron Klain memo, Biden will take “decisive action” to address the country’s multiple crises and “to prevent other urgent and irreversible damage and restore America’s place in the world.”

I also know COVID-19 testing to be expanded, vaccination strategy accelerated and the reopening of schools and businesses will be promoted. Biden “will order his cabinet agencies to act immediately to provide financial assistance to families suffering the bulk of this crisis,” Klain added. Additionally it will extend the “US buy” policy (a provision for government agencies to purchase goods and contract services performed locally), will promote “the equality and support for communities of color”And will expand access to Medical insurance.

Although not included in Klain’s memo, Mic reported that it is likely that in his first 24 hours in the White House Biden cancel permit for Keystone XL pipeline, of more than 1,500 kilometers, that had been canceled by the courts and was one of the first executive orders that Trump signed in 2017.

For his part, Psaki announced that the first call that Biden will keep with an international leader will be next Friday, when you will speak by phone with the Prime Minister of Canada, Justin Trudeau. In that talk they will discuss the “important relationship with Canada” and the decision of the Biden government to stop the construction of the Keystone pipeline.

Among other issues addressed during the press conference, Biden’s spokeswoman indicated that another axis of the president’s management will be “Advance racial equity and eradicate systemic racism from federal programs and institutions.” Along these lines, he assured that the Democratic president will have another policy regarding the Muslim community, compared to the one applied by Trump.

In her first appearance before the local media, Psaki revealed the special request that Biden made of her for her work as press secretary: “The President asked that we return truth and transparency to this room (…) The President works for the people. I work for him and therefore for the people. Our job will be to bring the truth back to the White House and provide accurate information to all of you. “.

“There will be moments where we will see things differently between us. It is part of democracy. It is essential to rebuild the confidence of Americans ”, he completed.

Joe Biden will propose a bill for the naturalization of immigrants