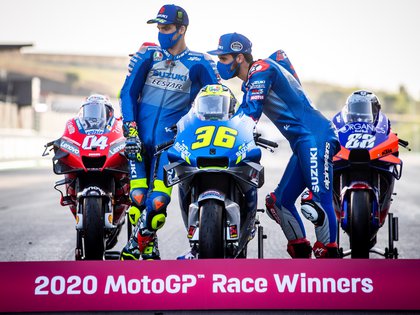 Sports writing, Nov 19 . .- Spanish Joan Mir (Suzuki GSX RR), 2020 MotoGP world champion, arrives in Portugal “wanting to finish this weekend, the last of the year, and with many desire to finish in the best way “.
“I’m going to go out like every weekend, to give 100 percent and do my best, we will see if I have the competitive package to win and if so, I will try to fight for the victory and go for everything; it is important, but so is respecting my teammate and we also have the goal of winning in Constructors and we cannot sleep, so we both have to do a good result, “said Mir about the possibility that Alex Rins, his teammate , can be world runner-up.
“It is important to see in what way I can help Alex. I am delighted, but for the situation to arise that I can help him, Morbidelli would have to be behind him and, in that case, the situation of that I was first, Rins second and Morbidelli third so that he could not be runner-up and in that case he would tie with Morbidelli, but Franco has more victories. If this arises and they ask me, I would have no problem helping him “, stressed.
On the possibility of wearing the number 1 on his motorcycle next season, he commented: “(Davide) Brivio (team manager) told me that he would like me to wear the number 1, but I am not entirely clear because with the 36 I have already been proclaimed world champion twice and it is a number that gives me luck. I still wear 1 and I never take it off anymore, who knows (laughs). But with 36, better known bad than good to know “.
Joan Mir also spoke about his performance this season, noting that he feels mentally stronger than his rivals. “In the sense that, when I have not had to fail because of the pressure, I have not failed. Even the pressure has helped me to be even more competitive. The pressure has not taken away my speed, it has given me it,” he said. .
As more practical lessons of the season, he pointed out: “I have learned a lot. It is difficult to say what, because internally I have matured more, I have been able to exploit this season the virtues that I had in the best way, I have given everything and that surely our speed has not been the best. “
“I have not been the fastest of all in all the tests during all the races, but I have been the most constant, the most constant and usually I was the one in front and that has led us to exploit the virtues of the Suzuki” he explained.
“Maybe it wasn’t the bike to win in many races, but when it wasn’t there to win we were on the podium and got points. I think I’m confident for next year, because we can have a good season if we improve our speed a little more. and thus, without any ‘pole’, we have taken the title, so the day we have that speed to do those things, with an even more competitive package, I think we can have a championship with a real authority, “he stressed .
Mir is a friend of Albert Arenas, who is playing the Moto3 world title this weekend.
“Albert has a good brown, because he does not have many points of advantage and can be proclaimed champion, but Moto3 is difficult, the guy has to be very determined according to what moments and take risks, but also up to a point,” he said.
“That he is very clear about the combinations that would make him champion, but above all that he does not trust himself because, in Moto3, with so many people going in a group, it is important that if Ogura is second you have to be third, and then Ogura wins in the last back. It is a bit complicated to manage, but I’m sure he will do it well and has a point more than the others in terms of maturity and he will do it very well, “he said. .
JLL / ism