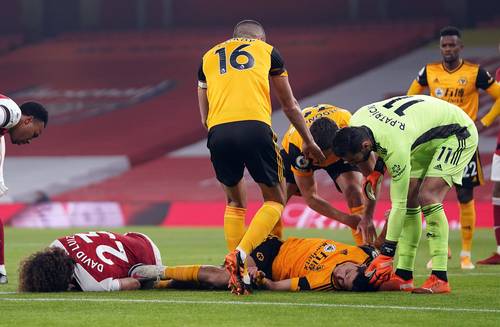 London. Wolverhampton striker Raúl Jiménez was hospitalized after suffering an impressive head butt with Arsenal defender David Luiz on Sunday at the Emirates Stadium. The Mexican attacker was left unconscious and after 10 minutes of medical attention he was removed on a stretcher.

The injury occurred five minutes into the match corresponding to date 10 of the Premier League, after the collection of a corner kick from Willian. Jiménez and Luiz fought the aerial ball and collided heads, the blow reverberating in the empty stadium.

Medical personnel were quickly called in for help. Luiz sat down after a couple of minutes and was served to one side of the Wolves goal; then he went to see Jiménez, played the rest of the first half and no longer came out for the complement. Raúl was left immobile and unconscious, received oxygen and was transferred on a stretcher to a hospital.

It is well within the severity of the problem. He is speaking, he is conscious, he is undergoing a scan and needs to be properly evaluated, but he is in good hands, said Wolverhampton manager Nuno Espirito Santo, whose team won 2-1.

“I knew immediately that it was something bad. Everyone was yelling ‘red, red’, which means a serious situation. I saw the panic in their eyes … we are very worried, “he added.

After the game, Wolves captain Conor Coady noted that everyone on the squad is confident Raúl will make a full recovery. Pedro Neto, author of one of the goals, at minute 27, dedicated the victory to Jiménez: We did what he would have liked: focus on the game. We had to win for him and dedicate the victory to him.

The other goal was Daniel Podence (42) and Gabriel dos Santos (30) scored for the Gunners.

“Important victory, but the most important thing is the health of our teammate. Be strong @ Raul_Jimenez9 ”, tweeted Spanish international Adama Traoré.

Luiz wrote on Instagram: Sad day for us. We have to fight together until the end. I also want to thank you for all the messages and ask everyone to pray for Raúl Jiménez. Get well soon, brother.

This action will once again bring to light the debate on the protection of footballers in cases of commotion and will provide arguments for those who defend that they be replaced immediately. One of them is former Chelsea and Glasgow Celtic striker Chris Sutton.

Terrifying clash of heads between Jiménez and Luiz. It’s time for football to get smarter and immediately authorize temporary substitutions due to shock. Jiménez was not well, but has Luiz been properly reviewed? Sutton tweeted.

Arsenal manager Mikel Arteta said that the only thing David worried about was the cut, nothing more. He explained that he replaced him at half-time because he could not hit the ball with his head and a center-back who cannot head cannot play.

Tottenham caught up with Liverpool in the lead after adding a point in the goalless draw against Chelsea, on a day in which Uruguayan Edinson Cavani led Manchester United’s comeback in Southampton with two goals and an assist for his team to win 3-2.

Tottenham and Liverpool have 21 points, while Chelsea is third with 19.

Matchday 10 closes this Monday with the Leicester-Fulham and West Ham-Aston Villa matches.