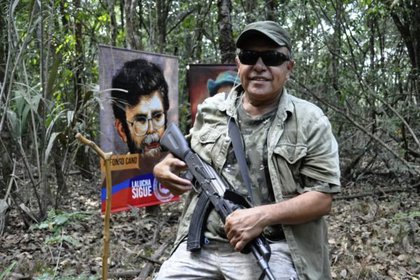 Jesús Santrich, a repeat offender of the FARC and one of the leaders of the Second Marquetalia, in a recent photo shared from the Colombian “mountains.” Source: Latin American Summary

The dissident of the Farc Jesús Santrich broke his silence and granted an exclusive interview to Noticentro 1 CM & from underground.

Likewise, the guerrilla chief confirmed that Yes, it was the secretariat of the former Farc in charge of giving the order to end the life of the conservative leader Álvaro Gómez Hurtado.

Read: Iván Duque appoints manager for the reconstruction of Providencia

“The death of Álvaro Gómez is not an assassination, it is an execution, it was a decision taken by the leadership of the Farc-EP, in the seventh conference and that was executed many years later by an order that was given in that direction”, revealed to the central newscast of Channel 1.

Santrich also clarified that the responsibility for the assassination is not a particular responsibility but a collective one. “They tried to eliminate one of the people who had the greatest impact on the outrage, the persecution, the deaths suffered by the Colombian peasantry, and who continues to suffer,” said the fugitive from justice.