The American firm is about to present the new update of the Jeep Compass and as a preview has revealed some sketches and real images of the compact crossover, including its renewed dashboard and its new floating-type touch screen.

It is no longer a secret, the Jeep Compass 2022 is the novelty that the American brand plans to present at the International Automobile Exhibition or Guangzhou Motor Show 2020. One of the few “motor shows” that have been held this year and whose doors will officially open on November 22, so we are just a couple of days away from the start of this event and the presentation of the many models that will be unveiled there.

Although we have already seen several spy photos of the development prototypes of this model and even leaked photos of the different variants that will make up the C-SUV range without camouflage of any kind, the brand has decided to advance the launch of the model with the presentation of a series of images as teasers. Which has partly revealed the exterior design of the renewed crossover and some important details of its new interior. 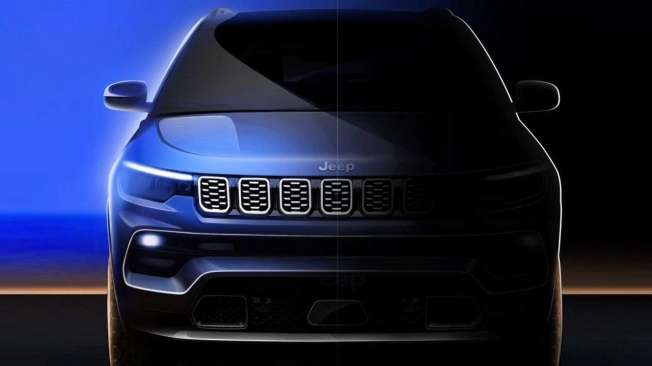 Among the different images recently published by the company we find a series of sketches that show us the exterior of the model from its frontal perspective, including a detail of the slightly modified front grill with the traditional 7 vertical grooves of Jeep. We can also see real photographs of the interior, although these focus only on certain areas of the dashboard and of the new multimedia center screen.

The central screen seems to be the great novelty of this update, because instead of the current infotainment system, whose screen is embedded in the center of the center console, we now find ourselves a larger, floating-type touch element crowning the console. These images correspond to a variant of Chinese specifications of the model, hence the language that appears on the screen is Chinese, but we can recognize some symbols related to the air conditioning system and therefore, this will be responsible for absorbing some of the the functions of the controls that were previously located on the console.

The presentation of the new Jeep Compass 2022 will take place sometime in the next 2 days and although the first market that will have the opportunity to see the renewed model is the ChineseWe can hope that the variant intended for Western markets, such as Europe or North America, will not differ too much from this model.