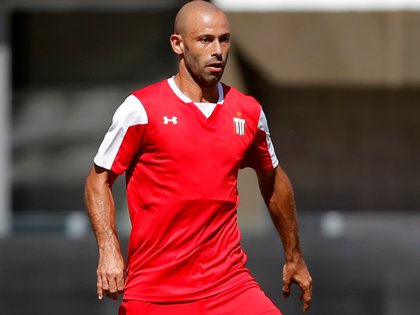 Buenos Aires, Nov 15 . .- Javier Mascherano announced this Sunday his retirement from soccer after the defeat suffered by Estudiantes de La Plata against Argentinos Juniors, for the third day of the Argentine Soccer Professional League Cup.
“I want to announce that today I am retiring from soccer professionally, I want to thank this club that gave me the opportunity to finish my career in Argentina,” emphasized ‘El Jefecito’, 36, in a virtual press conference where he was accompanied by the technician Leandro Desábato.
“It has nothing to do with the club or the results, they are personal sensations. I appreciate that Estudiantes has made me return to Argentine football. I am grateful to Desábato and all my teammates for having supported me during this time,” said the former Barcelona player.
In addition to Estudiantes and Barcelona, ​​the player trained in the lower divisions of River Plate in his extensive career went through the Brazilian Corinthians, the English West Ham and Liverpool and the Chinese Hebei Fortune.
Two times Olympic champion with the Argentine National Team at the Games in Athens 2004 and Beijing 2008, Mascherano also participated in four World Cups (Germany 2006, South Africa 2010, Brazil 2014 and Russia 2018), the World Sub’17 of Trinidad and Tobago 2001 and Sub United Arab Emirates ’20 2003.
To complete his competitions with the Albiceleste jacket, he integrated the teams in five Copa América (2004, 2007, 2011, 2015 and Centenario 2016), in addition to the South American Sub’17 Peru 2001 and Sub’20 Uruguay 2003.
At the club level, Mascherano has accumulated 21 titles in his record: one with River, another with Corinthians and 19 with Barcelona, ​​a club where he played between 2010 and 2018.
The future of Mascherano will be linked, almost certainly, with the Argentine youth teams from next year, after several conversations with Claudio Tapia, president of the Argentine Football Association.