At ESPABOX we have been able to speak with Javi gallego, manager of the Barcelona promoter Gallego Prada. With him, we have reviewed the effects of the pandemic and the state of the main boxers of the large team that they have.

Regarding the effect of the health situation on their activities, Javi Gallego told us that “I remember well when it all started, on March 13, 2020. We had an event where Isaac Real was going to contest the European Union title and Moussa Gholam was defending his Intercontinental WBO championship, and that’s when the nightmare began. It lasted just one year, until March 20, 2021, when we resumed our activity. It has been impossible to hold any event before, because our main source of income is ticket sales, since the support of televisions in Spain is nil and now, with the pandemic, it is very difficult to find sponsors. Due to the particular situation of the restrictions in Catalonia, we have had it a little harder than in other communities, because we could not get any public and thus it was not possible to hold events last summer, as they did organize MGZ or MaravillaBox » .

Fear is still present in a way, despite the improvement in the situation, when the promoters can carry out the galas: “We are uncertain that something may have to be canceled at the last minute, the issue of restrictions and travel … The other day, for example, Alejandro Moya’s rival, with all due respect and honoring the great role he played, we I would have liked it to be a little bit better if the fear of flight cancellations or a sudden restriction had not been present, and even problems when it came to getting around ».

Javi wanted to remember that boxing is safe, and asked for the support of the public when going to the evenings. “We comply with a thousand rules, from the mask to the distance, going through something as simple as having a bar on the premises, which means organizing people in different lines so that they do not mix with each other. And if there is a positive among the attendees and it is necessary to notify it, have the personal data … The whole protocol is being carried out to the letter, and I think people are aware of it, because in the two events of the last weeks we have posted the no tickets sign ».

Talking about these recent evenings, he tells us how normality is returning to Gallego Prada: “Little by little the rhythm of events is recovering, and the most important thing is that fear is being left behind and with fewer audience restrictions, which will allow us to improve the level. We have been able to have small evenings in the towns of Melania Sorroche and Alejandro Moya, so that they are active. Also this Saturday, Moussa Gholam will be present at the Team Solé de Badía del Vallés evening ».

Asked about the problems of understanding with Gholam in some phases of the pandemic, the promoter opened up like this: “This time has been very hard for everyone, and this conflict could be solved by talking, which is how problems should be solved. It will be a shooting match, and as of Saturday we will think about greater challenges, because Moussa is a spectacular boxer ».

In the medium term, he told us that “We are working on an event at the end of July or the beginning of August, but we depend a little on the fact that the official challenger of the European of Melania Sorroche, Elodie Bouchlaka, has been injured, and for that reason we do not know if she will arrive in time. We will also have the Frank Urquiaga European Union Championship, and a series of more fights: Alejandro Moya, Moussa Gholam and, perhaps, a newcomer from the amateur team. It will be our only big event in the summer.

About the cancellation of the Rubén Díaz European Championship, which should have been played this weekend: “I don’t want to be misled, I understand that Matchroom and Opi have such a heavy load of events that many times they cannot work as far in advance as it should be. I know they were working on the event and they had no bad intention, but Matchroom is covering so much in so many places that in the end it is impossible and you can neglect some things. In addition, the summers that there are other great television events of soccer or Olympic Games, the televisions have to choose and they go to the most profitable. For this reason, in the end it was postponed and they tell us about the end of September, even October. For us, and especially for Rubén, who had spectacular conditions for his last big opportunity and had stopped working for two months on the preparation, it was a hit. But we need to reset, and I am convinced that Rubén will have the belt in Pamplona in October. Rubén has serious options to beat Signani, the money here is secondary because what really matters to us is to be champion ».

About other members of his team, Javi told us that “Chaca (Isaac Real) is waiting for the title of the European Union, and everything that happens will depend on his motivation, because physically he is perfect; I guarantee that we will see him again on the ring. With Abigail Medina we are more cautious, because her left shoulder injury has already given us many headaches; His medical team makes us think that he will be in the elite again, and I hope he can give us many joys again. In addition, we have a new batch of competitors such as Cristian Eusse, Sebastián Pinoargote, Andrea Lasheras or Edu Torres, whose names will soon be present in Spanish boxing ».

Javi Gallego finished by asking again for the support of the spectators and fans: «We had a great event at the end of 2019 with Kerman Lejarraga, the return of Abigaíl Medina, Alejandro Moya’s Spanish Championship, Melania Sorroche’s European Championship, Moussa Gholam’s WBO title … And there were 500 or 600 punctures on television , as I said in a talk right here in ESPABOX. That way we can’t do high-quality galas, because we get 5,000 euros and that doesn’t give us to pay for even a fight. That is why we have not been able to do anything in times of the covid behind closed doors, because it is unfeasible. So we need people to come to boxing and, more importantly, to attract the public from outside of boxing. Perhaps the way is to combine sporting appeal with media interest, like what happened with the youtubers last month and the pull that event had. We probably need to reinvent ourselves.

The full talk can be seen on video at the following link, starting at minute 16 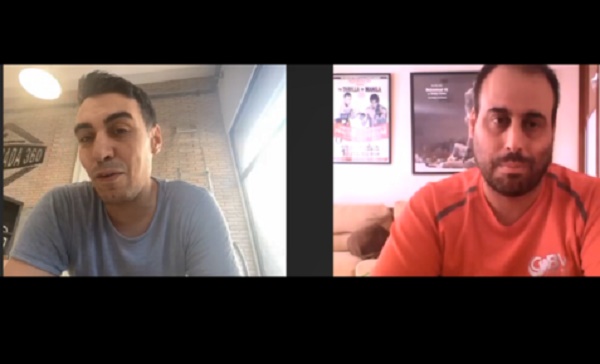