“I never held him in my arms (the baby), physically I never said goodbye to him. Although I am going to tell you that Martín kept the ashes, he never told me. I think it was before I got pregnant with the babies that she said to me: ‘I have our baby’s ashes, what do we do?’ 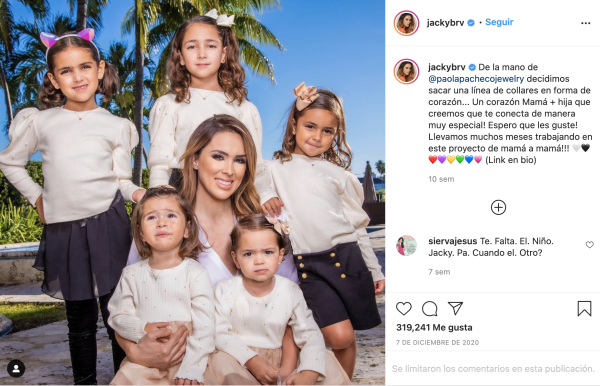 The former beauty queen said that after the news, she made the decision, along with her husband, not to bury her son, but to spread his ashes in the sea, so she organized a ritual to say goodbye to her baby. “I told him ‘I don’t want to bury him, I want him to be near us…’ I love the sea, Martin loves the sea… I told him ‘let’s spread the ashes in the sea’ and that’s what we did. He and I went to a ritual that nobody knew about, we both cried again, imagine, after so many years ”, he declared.

The 41-year-old interpreter also spoke of the deep depression she faced after the baby’s death and how it was that she coped. “I spent 21 days in the hospital… I couldn’t even stop to walk (…) it was very hard what I had to live (…) It helped me to have my daughter Jacky there because many people lose their baby and are left without nothing, empty handed, I had my Jacky, who was in intensive care fighting for her life, “he said.

Finally, Jacky Bracamontes acknowledged that although all her pregnancies have been natural, only once did she resort to ‘sex separation’. However, he stressed that it did not work because his twins, Emilia and Paula, were born. “I think they were wrong and gave me the girls,” he acknowledged.