Broken after being eliminated from the Eurobasket by Serbia on Wednesday night in extra time in the quarterfinals (71-64), the team is experiencing a bitter hangover despite the fact that the conclusions must necessarily be positive since this Saturday at 3:00 p.m. he will face a decisive match for his immediate future against Maria Vadeeva’s Russia.

And it is also in Valencia, for the team directed by Lucas Mondelo victory is necessary to get the precious ticket for the World Cup, where they would choose to qualify for the event that will be held in Australia from September 22 to October 1, 2022.

In this sense, it should be remembered that Spain got the bronze as host in 2018 in the last World Cup event in what was his third consecutive podium after the third place achieved in 2010 in the Czech Republic and the sterling silver that was hung in Turkey in 2014 coming to face the intractable United States with a colossal performance of Sancho Lyttle (64 -77).

Spain is completing a remarkable performance in the Eurobasket despite the fact that he had not been out of the semifinals for 10 years since he has since won three titles and a bronze medal. That is, seven wins and a single loss in the last two rounds of the Europeans.

However, the circumstances weren’t even remotely the same. To the well-known resignations of two pillars such as Anna Cruz (with great controversy for her statements) and Laura Nicholls, since her icon Laia Palau is already 41 years old, the Casualties due to two positives of Covid-19 by Tamara Abalde and Alba Torrens who had become one of the main and indisputable references of the team. 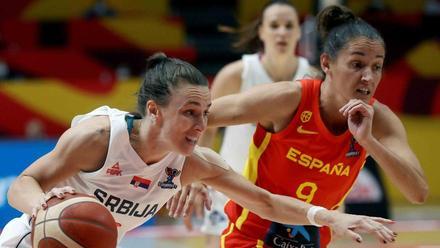 Laia Palau continues to give ‘war’ at 41

Despite this and the unexpected initial defeat against Belarus, the team managed to rebuild itself with three consecutive wins and fought to the end against Serbia. In these five encounters it has become clear that Astou Ndour is already a leader for the national team and, in fact, one of the explanations for the defeat was that they did not ‘find’ it after scoring 12 points in the first half.

Also, young players like Raquel Carrera, Laura Quevedo, María Conde or Maite Cazorla They have taken a big step forward and … they are the future of this team.