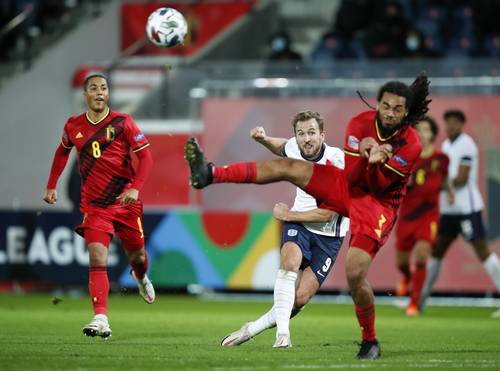 ▲ Jason Denayer tries to block the shot of English striker Harry Kane (9), during the game that Belgium beat England 2-0, on the penultimate day. Photo Ap

Paris. After their victories yesterday against Poland and England, Italy and Belgium depend on themselves in the last day of the League of Nations to win their respective groups and thus qualify for Final 4, to be played in October 2021.

In Reggio Emilia, Italy, which came to the game reduced by several important casualties, defeated Poland 2-0 with goals from the naturalized Brazilian Jorginho, from a penalty, at minute 27, and by Domenico Berardi, at 84. The Poles finished with 10 for the second yellow to Jacek Goralski, at 77 action.

Italy leads group A1, with nine points, one more than the Netherlands, which beat Bosnia 3-1 shortly before, and with two more than Poland, which fell from first to third place.

In Amsterdam, with a brace from Liverpool midfielder Giorginio Wijnaldum, in the 6th and 13th minutes, Oranje took the lead after a cross from Denzel Dumfries and Steven Berghuis. And at 55 of action, Memphis Depay sentenced the victory. The Bosnians scored the goal of honor, through Smail Prevljak, at 63.

The Azzurra will advance if they win on Wednesday in Bosnia, bottom row and that is already sure of relegation to the second category (League B). If not, everything will depend on the duel on the same day between Poland and the Netherlands, in Chorzow.

Denmark’s victory in extremis against Iceland, with a penalty in the discount from captain Christian Eriksen (90 + 2), prevented qualification for Belgium’s Final 4, which defeated England 2-0, with goals in the first part of Youri Tielemans (10) and Dries Mertens (23). The English no longer have options.

In group A2, the pass to Final 4, for which France qualified on Saturday, will be played by Belgians and Danes on Wednesday in Leuven, with an advantage for the Red Devils who, with two more points in the table, will have enough with a tie.

In League B, Slovakia, which made it to the European Championship on Thursday, defeated Scotland 1-0, another team that will play the European national team tournament in June 2021.

Wales, led by Gareth Bale, beat Ireland 1-0, with a goal from David Brooks, but Finland’s victory in Bulgaria (2-1) forces the British at least to draw against the Nordics on Wednesday to move up to the first League of Nations category.