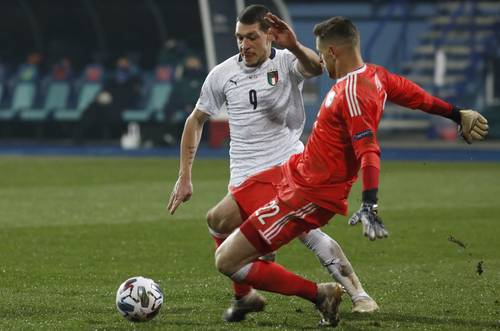 ▲ Andrea Belotti, who scored one of the goals in the Italians’ 2-0 win over Bosnia, faces goalkeeper Kenan Piric yesterday, during the match held in the city of Sarajevo. Photo Ap

Sarajevo. Italy and Belgium advanced to the UEFA Nations League finals after defeating Bosnia-Herzegovina 2-0 and Denmark 4-2, respectively. These teams join France and Spain in the outcome of this tournament, scheduled for October 2021.

Absent from the 2018 World Cup, Italy seems to return to the elite of European football, with a young team and no international experience. Andrea Belotti and Domenico Berardi scored the goals in a match that they dominated as they pleased to be top of Group 1. They were one point ahead of the Netherlands, whose agonizing 2-1 victory over Poland fell short.

In principle, the Azzurri will host the Final Four of the second edition of the contest. The designation of the host must be confirmed by the UEFA executive committee next month.

Italy faced the closure of the group stage without its coach Roberto Mancini and forward Ciro Immobile, both affected after contracting the coronavirus. Other players were ruled out due to club quarantines and injuries.

We are talking about the best teams in Europe and we want to see what our level is, admitted Alberico Evani, assistant coach Mancini, still confined by Covid.

We’ve talked all day, and I think the guys tonight gave him great satisfaction and gave him (Mancini) a great gift, Evani added.

Belgium won with two goals from Romelu Lukaku and took first place in Group 2. A draw was enough to advance and they finished with a difference of five points over Denmark and England.

“The opponents that we will have in Final 4 show the level of this competition well. We have worked hard for this and it is positive that Belgium continues in this tournament, ”said coach Roberto Martínez.

In London, England beat Iceland 4-0 with goals from Declan Rice, Mount Mason and a double from Phil Foden.

This is how the semifinal of Final 4 was defined with the representatives of France, Spain, Italy and Belgium to see who succeeds Portugal, winner of the first edition of this tournament, in the list of winners.

None of the four participants in the first tournament (Portugal, Holland, England and Switzerland) achieved qualification this time.

Austria, Czech Republic, Hungary and Wales achieved promotion to the top flight for the next edition of the League of Nations.