After leaving Movistar Inter and Palma Futsal (with the track factor against) in the gutter, a reborn FC Barcelona plays this Thursday the first match of the final at the Palau at 8.30 pm against the less and less surprising Levante UD.

With the ticket to the next Champions already secured for both teams, the Barça goal is to take the first step to have two chances to conquer their fifth league (the first in Paterna on Sunday and the hypothetical second, on Wednesday again at the Palau) .

In one of his last meetings on the bench, Andreu Plaza returns after missing the two matches against Palma for the direct red he saw in the third quarterfinal against Inter.

“The icing on the cake is the Champions League, because it is the most media title, but the most difficult is the league for the number of games you have to win and for this complicated play-off. I think that the way things have gone, it is a success to have reached the final and once here, we will try to win it, “said the Girona-born.

“We have reached the final in the third and fifth of the regular season, which shows the enormous equality that exists. Getting third position on the last day now gives us the advantage of the court. You have to win two games and it does not matter the order, although it is clear that winning the first is a mental plus. Yes it is important to win the first one, but it is not definitive, “continued the Barça coach..

Plaza emphasized that they arrive with good feelings. “Physically we are well, because having finished the semifinals in two games unlike the rival gives us a small advantage, because we also disconnected for three days to recharge the batteries and I think that the team arrives in very good condition to face this match, “said the Catalan. 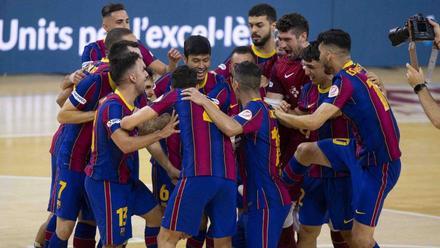 Barça knew how to suffer to eliminate Palma

“Levante have had a sensational season and already have an award that perhaps they did not expect, the Champions League. Now they come with a point of lack of pressure and that makes them even more dangerous, because we have the pressure of having to win whenever it is also doubled due to the advantage of the court, but we arrived with a lot of confidence “, concluded the Barcelona coach.

One of the best news of the semifinal round was the work of Dyego despite the fact that he has been in all the play-offs with a serious ankle problem that prevented him from participating in the last two quarterfinal matches against Inter.

“I am very motivated. Playing a final is always the best thing that can happen to us. And on a physical level, because I still have discomfort. I was left out of the quarters and I’m playing with pain but I’ll do my best and I am very happy to be able to be on the track, “said the Brazilian. 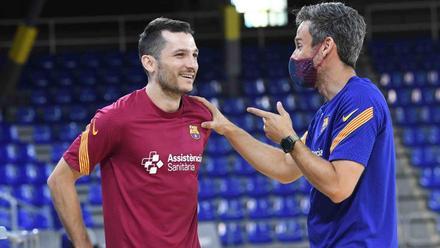 “It has been an atypical year with many difficulties at the beginning. In the league we did not start well and in the end we were able to be third. It has never happened that the third party has a court advantage in the final and that shows how different this league is being. We are very happy to have reached the final of the league and it is very important to be able to decide at home “, stressed the one from Palmitos.

Dyego insisted that Levante “has had an incredible season. It is very important to win the first game. You have to win anyway. If you lose, you have to win at your opponent’s home, which is much more difficult. I think that if we go 1-0 the pressure will all go to his side and that can make things easier for us. “