The system will make landfall somewhere between northeast Nicaragua and eastern Honduras on the night of Monday, November 16 (GIF: NOAA / RAMMB)

This is how the US National Hurricane Center (NHC) described the stalking of the hurricane Iota, which in the last hours strengthened in the Caribbean Sea and advances as a powerful phenomenon of category 4 on the Saffir-Simpson scale towards Central America.

“It is expected to bring catastrophic winds, a life-threatening storm surge and extreme rainfall impacts to Central America,” the Miami-based climate agency reported.

If the system maintains its speed and trajectory, it will make landfall around Monday night, somewhere between northeast Nicaragua and eastern Honduras, countries that are still recovering from the onslaught of cyclone Eta. According to the NHC, before hitting the continent, Iota it could become a destructive Category 5 hurricane, in other words, the highest level in the measurement of this type of tropical phenomena.

As it approaches the coastline, it will generate storm surges that would move between 3.65 and 5.50 meters. This means that In coastal areas of Nicaragua and Honduras, the water will enter the communities and the tide could rise up to 5.50 meters above the normal level.

Minute by minute, with Nicaragua and Honduras time (GMT-5) 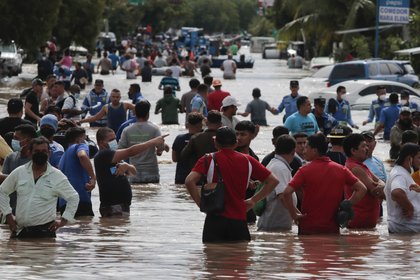 06:10 (12:10 GMT): Iota quickly escalated during the early morning, and evolved into a Category 4 hurricane on the Saffir-Simpson scale, with maximum sustained winds of 245 kilometers per hour.

The center of the cyclone is located 35 kilometers northwest of Providencia Island, Colombia, and 235 kilometers southeast of Cabo Gracias a Dios, which is located between the border of Nicaragua and Honduras. It is moving west at 17 km / h, heading for Central America.

From the NHC, they issued the following alerts:

– Hurricane Warning: Providencia; the Nicaraguan coast from the Honduran border to Sandy Bay Sirpi; the northeast coast of Honduras from Punta Patuca to the border with Nicaragua.