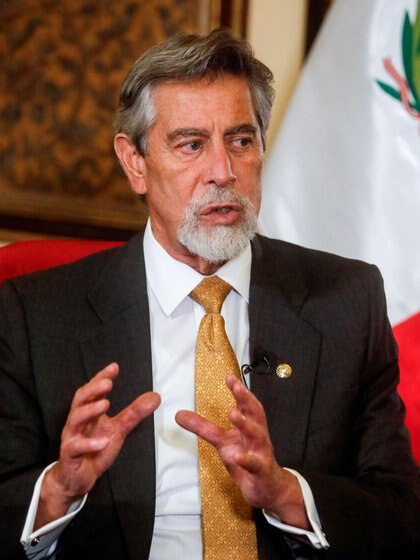 By Marco Aquino and Marcelo Rochabrun

LIMA, Nov 20 (.) – The interim president of Peru, Francisco Sagasti, said that due to the current economic and health crisis in the country, it is not urgent to propose a new Constitution as demanded by a sector of the population that led the recent protests .

In an interview on Thursday night, Sagasti stated that the immediate objective of his transitional government is to restore tranquility to the country that experienced an intense week after the removal of one president and the resignation of another.

“I think that after such a turbulent period, so full of protests, even some violence, the most important thing at this time is to restore calm, restore tranquility to the citizens,” Sagasti said in one of the facilities of the Palace of Government in the center of Lima.

The centrist engineer and legislator assumed power on Tuesday, following the resignation of Manuel Merino pressured by strong protests over the unpopular decision of the opposition-dominated Congress to remove President Martín Vizcarra due to corruption accusations.

“(…) We believe that it is a task that the next government freely chosen by the citizen makes the decision or not, to propose the reform of the constitution or a new constitution,” said Sagasti.

In the latest protests that overthrew Merino and allowed Sagasti to take office, the protesters wanted, in addition to a reform of the discredited Congress, a new Carta Maga. Many young people who led the protests say they will not stop until they get a new constitution.

Analysts have made comparisons between the incipient protests in Peru and those in Chile, which lasted for months and ended with the government calling for a referendum on whether or not to make a new constitution, which was voted favorably by almost 80%.

“It doesn’t seem like an immediate priority to us,” Sagasti said about the possibility of supporting a referendum or a change to the current Peruvian constitution, which was created by former president Alberto Fujimori in 1993 after closing an opposition-led Congress and governing with firm hand.

Market agents fear that a new Magna Carta – proposed by sectors of the Peruvian left – will turn the Peruvian State into an intervenor to the detriment of private initiative, with the danger of losing economic stability.

In the last two decades, Peru grew at the highest rates in Latin America and reduced its poverty to 20% from 60%. This year poverty will increase to 30% due to the pandemic.

Sagasti also affirmed that in the political arena a crucial task is to hold transparent elections on April 11 and have an orderly transfer to the new government on July 28, 2021, the day of the bicentennial of the country’s independence.

“Let’s not forget that we are in the middle of an electoral process,” he said. “In a situation as complex as this, it is important to guarantee the adequacy of the elections,” he added.

Sagasti also said that his government will not allow the deaths of the two young people and the wounded who left the protests to go without justice, but pointed out that, however, all the police should not be stigmatized for the abuse of some.

“We will not leave unpunished in any way those who have committed these acts of violence and violation of human rights, but we will not go to the other side saying that all the police are like that,” he said. “For that reason we do not stain all the police, by the effect of the attitude of some elements”.

On Thursday’s decision by the Constitutional Court that rejected a lawsuit to determine whether there was abuse by Congress in the removal of former President Vizcarra, Sagasti said that he respects the decision but that he waited for the court to settle the issue.

“We hoped that the Constitutional Court would help to give an interpretation to this phrase so complicated that it is permanent moral incapacity” in the approval of a presidential vacancy in the Congress, affirmed the president.

“I think it would have been a little more useful for the political stability of our country if we had some criteria,” he said.