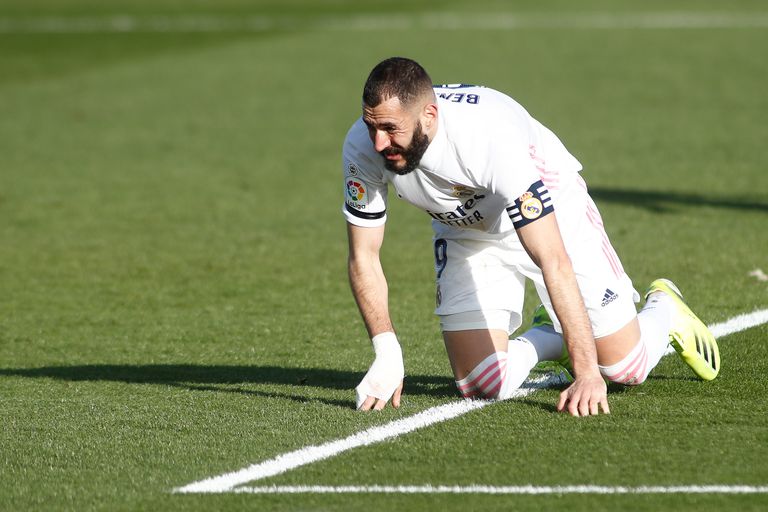 Injured Sergio Ramos, there was practically no worse news for Zinedine Zidane than the fall of Benzema as well. In his eyes, the only possible forward in the current squad. The French coach travels to Valladolid this Saturday (21.00, Movistar LaLiga), with no margin for error in the championship, with the absence of his fetén striker and the anguish of not knowing if he can count on him in Bergamo next Wednesday in the first leg of the eighth of the Champions against Atalanta. The player, who did not train this Friday, suffers some discomfort in the abductor of his left leg and is awaiting further tests.

The news further worsens the bleeding of Real Madrid medical casualties. It is the 39th injury this season, a figure significantly higher than that of a punished Barcelona (25), and well above that of Atlético (16 with the last one from Carrasco). At the decisive moment of the course, with the team hanging by a thread, again clinging to European hope almost like the last float, there are nine players filling the infirmary, and several of them from Zidane’s group of non-negotiable: Carvajal, Valverde, Militão, Rodrygo, Odriozola, Hazard, Marcelo, Ramos and now Benzema. Except for the question of the Frenchman, it seems unlikely that any of the rest could be in full condition in the continental duel.

Benzema has 17 goals this season, seven more than the rest of the forward together

Apart from the accumulation of physical misfortunes, the loss of Benzema already in Zorrilla opens an irreparable sinkhole in the white attack. By consideration of ZZ, production of the forward and wardrobe, the injury is very serious. The French attacker has scored 17 goals this season, seven more than the rest of the lead together: Hazard and Vinicius have three; Asensio, two; and Rodrygo and Mariano, one. Jovic returned on loan to Eintracht with the account at zero. And in the global arena, between Benzema and the second highest scorer (Casemiro with five), a desert.

His absence at this delicate moment delves into Madrid’s main problem since Ronaldo left. The Portuguese exile, the only striker capable of regularly keeping the fort standing in front of the rival goal has been Benzema, at the highest of his career these three years. Behind him, a hole only alleviated last season by the cooperative effort of everyone to add little by little (22 different scorers; 15 in this one) and, especially, by a defensive efficiency that this season has partially blurred (the average of goals conceded has risen in LaLiga from 0.65 to 0.82).

In Zidane’s mind, there is only one possible forward. The rest of the alternatives have always been forced fixes. This campaign is the third in number of minutes (2,386, after Courtois and Varane) and the previous one, the second (3,981, after Casemiro). While the French has been healthy, he has only executed that option. The only variant in this situation is when he has been accompanied by others, as with Jovic at the beginning of this course in two consecutive matches (Villamarín and Valladolid), a decision that was surprising because of the unusual and that did not have continuity.

The natural replacement for the Frenchman is Mariano, who has been taught the start several times and only has two goals in a year and a half

The Serbian has already gone back to the Bundesliga in an attempt to re-float a trajectory in free fall, so the only alternative in the first team without changing players is Mariano. The 21 goals he scored in a season at Lyon and the fear that he would triumph at Sevilla, who had been interested in him, pushed Madrid in 2018 to pay 21.5 million to recover the Hispanic Dominican and deliver him the number seven that he had just left Portuguese. However, its devaluation was almost automatic. In three seasons, he barely adds eight starts, 1,205 minutes and six goals (two in the last year and a half).

11 outfield players from the first squad

The club and Zidane have shown him the start several times, but the forward has refused to leave at any cost. Now Benzema’s injury opens a gap for him to slip through. He already had it last November due to another loss of the French. Then he started at San Siro against Inter, at Villarreal and at home against Alavés. That series of three consecutive games in the eleven, his best streak since his return, he resolved them with a goal at La Cerámica in the first opportunity he caught, and little more than signing up on the merit account. Beyond his first-touch finishing ability, Mariano’s football offers few resources, a catalog that pales in the face of the diversity of the Frenchman. In Zorrilla’s list, the five youth squad also includes attacker Hugo Duro, author of eight goals for Castilla.

Without Ramos – whose absence in Europe almost always translates into disaster – Carvajal, Hazard and Benzema, Zidane still has some of his irrevocable footballers standing: Varane, Asensio and the Casemiro-Kroos-Modric core line. However, if he maintains the continuity line in the alignments, when he looks at the bench he will only find Isco as the only outfield player in the first team, another name unable to date to stop his collapse. A fact that exacerbates the shortage of the white team in a very critical situation: it only has 11 outfield players from the first team plus the three goalkeepers. In addition to Hugo Duro, in Valladolid there will also be the homegrown players Chust (starter in Alcoy), Miguel, Arribas (he came out against Levante and Valencia ahead of Isco) and Blanco.