It has taken nearly a year and a half for Nissan’s premium division to officially introduce the new Infiniti QX55. A crossover coupe that uses the same technical basis as the Infiniti QX50 and is defined by the brand itself as the successor to the legendary Infiniti FX70.

About a year and a half ago, the first teaser was released as a preview of this new crossover coupe. Since then, the company has had to delay the presentation of the model on several occasions, to which has been added the problems derived from the health crisis that we are suffering throughout the planet. But at last it has been revealed and we already have all the images and data of the new Infiniti QX55, a model that is destined for the middle segment.

Unfortunately, we Europeans will not see this Infiniti model in our market, where it would be integrated into the step intended for the premium crossovers coupes of the D-SUV segment. The new Infiniti QX55 is the Japanese brand’s answer to models such as the Mercedes GLC-Class Coupé, the BMW X4 and the future Audi Q5 Sportback, which has not yet reached dealerships. 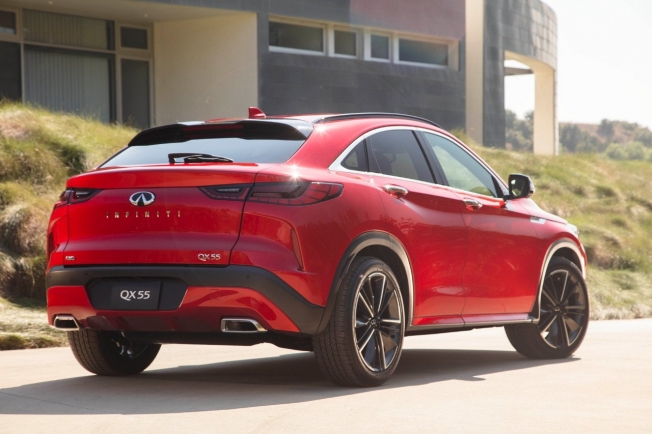 Its aesthetics completely breaks with the Infiniti QX50.

It is clear that the new Infiniti QX55 has little or nothing to do with its range brother, the Infiniti QX50, with which it shares a technical scheme. The new model has a lower body characterized by a high waistline and a fairly sloping rear window. The usual features of crossover coupes. But it also eliminates the characteristic Infiniti rear pillar with a notch in favor of a sloping pillar of straight shapes.

The model rides with the grill and the optics of its range brother, but grille features streamlined design and metallic finishes, while the bumper receives somewhat larger air intakes with black trim and slight changes in the lower area. So the front design of the new QX55 exudes the familiar style of all Infiniti models. While in the rear we find a quite particular image with some lamps whose graphics are composed of 45 individual LEDs that form a row of rectangular shapes. The rear bumper also mounts a very well integrated dark colored plastic element that follows the game of the black rings that we find in the wheel arches, which underlines the SUV image of the whole.

Inside there is a quite luxurious cabin but, curiously, it does not have a digital dashboard, despite mounting two large screens on the dashboard. In the upper one we find the elements of the multimedia system of any current vehicle, such as GPS navigation, while in the lower one we find the usual functions that we find in the controls of any central console. Leather finishes are present throughout the cabin. 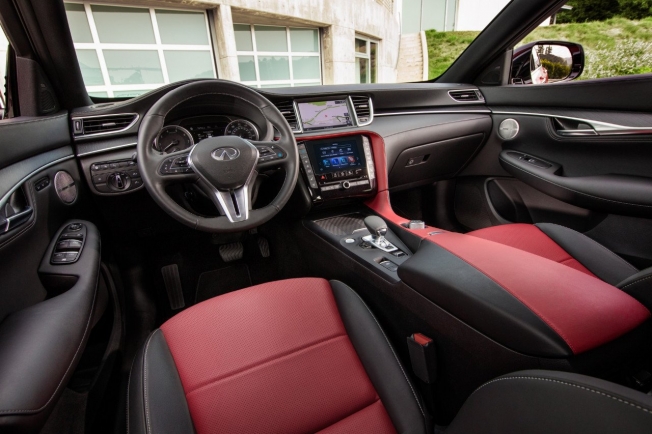 Lots of skin but no digital board.

The new Infiniti QX55 will only have a mechanical set available and it is precisely what we expected, the same block of 4 cylinders and 2.0 liters VC-Turbo that the Infiniti QX50 mounts and that delivers 272 hp and 379 Nm of maximum torque. As the only alternative, this sleek crossover coupe will only have one transmission option, a continuously variable automatic transmission (CVT).

Although we are only going to find a mechanical version, in markets such as North America it will be sold with three trim levels: Luxe, Essential and Sensory. With a wide and technological equipment as standard from the most basic level, which will include elements such as premium audio system, leather upholstery or even the driving assistance system ProPilot Assist from Nissan.

For the moment Prices for the new crossover have not been revealedAs well as the specific data related to its commercialization, they have only been limited to saying that it will reach North American dealerships during the spring of next year.