Something unusual happened last year, although for a very notorious basic reason: greenhouse gas emissions fell, including those of nitrogen oxides, largely due to the collateral effect of the pandemic, the cessation of activities and the confinements. And maybe because of all this in Spain we have returned to a level of carbon dioxide emissions below 1990.

Good news for our atmosphere that, although it has been motivated by this fact that we comment, is the last point in a progressive decline in recent years, according to data from the Ministry for the Ecological Transition and the Demographic Challenge (MITECO). A good data that unfortunately we have not seen at a global level, since a few weeks ago the news was that the planet reached its historical record of CO histórico since there are records.

A good figure to watch after confinement

According to the Progress of the Inventory of Greenhouse Gas Emissions (GHG) corresponding to the year 2020, the gross emissions of CO₂ equivalent remain at 271.5 million tons. This has reflected not only a decrease of 13.7% with respect to the levels of 2019, but also represents a quantity of emissions that is 6.4 below those of 1990.

The data, as we said, puts the icing on the cake a downward trend That in Spain is being seen in the emissions of the so-called greenhouse gases since 2007. Considering 2005, for example, in 2020 38.6% less gases were emitted.

In the introduction we alluded to the undeniable effect of the global pandemic that the Ministry itself cites in the report, although given that downward trend that has been taking place for more than ten years there are some more reasons to take into account. Specifically, the increase in electricity generation with renewable sources and the fall in the use of coal are cited.

It is detailed that greenhouse gas emissions associated with transportation fell by 17.6%, a considerable drop that may have been particularly influenced by the confinements and that will have to be watched next year to see to what extent de-escalation slows this decline. In fact, Spain is not a country that is characterized by leading the purchase and use lists of electric cars, so it will be necessary to see what happens with this variable.

Transport is, in fact, the sector that tops the list of emissions by areas according to the report with 27.7% of the total. Industry follows, with 21.4%, followed by agriculture and livestock (14.1%) and electricity production (10.3%). 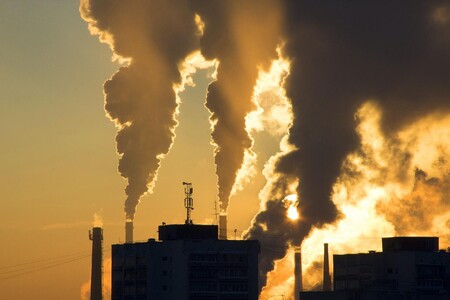 Speaking of the various gases, it is CO₂ the majority with 77.6% of the total of emissions for the period, being the “infuriating” methane the second with 14.3%. Nitrogen compounds remain at 7%, while fluorinated gases remain at approximately 2%.

Taking into account the removals of greenhouse gases by the forestry sector, net emissions in 2020 they are calculated at 234.9 million tons of CO₂ equivalent. Taking this into account, there has been a reduction of 15.2% compared to 2019, according to the registered data.

Although it is a good figure and it is well below the forecast calculated by this Ministry (281.5 million tons for 2020), it must be taken into account that although carbon dioxide emissions sank due to the stoppage of the cononavirus, temperatures have continued to rise, so much so that it is difficult to even keep track of high temperature records.

So we will see if Spain continues with good data and if more countries are also obtaining them, especially in the face of 2050 and the European goal of completely abandoning fossil fuels. In April 2021, its first Climate Change Law was approved in Spain and one of its objectives is to reduce greenhouse gas emissions by at least 23% compared to 1990 in 2030, so according to the data known with this advance we would have to decrease by approximately 8% in nine years to reach.