Faced with the flood of liquidity existing in the system, central banks happily irrigating fake money (only the Fed invents $ 30,000 million each week and the ECB around € 17,000 million also per week), and a global economy that loses inertia, the Monetary Fund International has decided to take action.

The IMF has created less than half of the brutal amount it is now preparing to create since its inception. To date, a total of 204.2 billion SDRs has been allocated to member countries, in exchange for approximately $ 290,000 million, of which $ 182,600 million were released in 2009 to combat the global crisis originating from the “subprime” riot in the USA.

The value of the SDR varies depending on the behavior of the currencies, it is linked to a basket of five currencies: the Dollar, Euro, Japanese Yen, Chinese Yuan and British Pound Sterling. In order to adjust the value of the SDR to the evolution of currencies, the basket is reviewed every five years. Although SDRs are not currency nor do they represent a credit against the IMF, they are considered potential rights against the currencies of IMF member countries and are exchangeable for freely usable currencies.

The SDR (SDR in English) is a kind of global currency, a global reserve asset created in 1969 by the IMF to supplement the official reserves of member countries and aimed at enabling countries with a lack of liquidity to obtain foreign exchange, transferring them to other surplus countries, within the framework of the IMF.

Mr Biden has praised the IMF proposal, as might be expected. More wood! is the motto, ignoring the liquidity trap installed in the system for years, the fact that the world is flooded with liquidity that gradually stimulates lower growth.

The effectiveness of boosting the money supply, liquidity and debts has been penalized for a long time by the adversity of the Law of Decreasing Returns, it is increasingly necessary to create more units of debt to achieve the same unit of GDP.

The real flow of money through the economy is low and has fallen to historical minimum levels, according to the behavior of the Speed ​​of Money Circulation.

But also ignoring that the excess of money supply, liquidity or fake money, usually ends up generating inflation, devaluation of currencies and loss of consumer purchasing power, the authorities in general continue to applaud the creation of liquidity.

The reaction of the stock markets yesterday was abrupt and the falls were as sound as they were unusual in the world of underpinning, asset reflation policies and stock market rally by decree to which the authorities have accustomed investors after 16 months of incessant manipulation.

After months of observing market excesses, distortions in the internal relations of the indices as well as in the economy-markets relationship, divergences, over valuations, over indebtedness, excessive confidence of individuals, etc. … systematically ignored by investors, with the stock markets also ignoring and recording new highs almost weekly, the developing guidelines have been scrupulously adhered to.

However, as we warned last week and in a very specific way in yesterday’s post, the incipient breakdown of technical references represents a real danger.

The process may have begun after the pattern breaks, numerous indices have broken theirs, the Russell, NYSE, Dow Transportes or the Nasdaq as we have been pointing out in different posts. The complacency to which investors were accustomed may return in the coming days.

The finding of the loss of momentum in the economic recovery together with the news of the evolution of the Delta variant of Covid, more contagious and dangerous that would be infecting even people with the full vaccination schedule, are factors that have also weighed.

Along with the above, seasonality, investor positioning and other purely market factors have aligned to defeat the powerful bullish patterns of the stock markets.

In short, technical problems and fundamental problems, a pandemic, a fall in the outlook for economic growth and a feeling that the Federal Reserve has very little room to act, even the anticipation that sooner or later it will announce the start of a “taper”, have created the environment. perfect to release pressure and deflate, for now a little, the market bubble.

One of the assets most affected by the first generalized and intense Risk-off session of the year was oil. Crude prices fell sharply and notably, as we expected, and our strategy appreciated yesterday.

There were various reasons to expect a downward correction in the price of crude oil, explained in different recent posts, and the wave of sales of risky assets yesterday coupled with the decision of OPEC to increase the production of barrels together with the concern about economic growth led to a drop to lead of more than 6%.

The strategy suggested to take advantage of the expected falls in crude, low risk and limited, has jumped strongly.

The falls in European stocks have also been felt by the strength and speed of the correction. The IBEX-35 has already fallen close to 10% in recent weeks and yesterday the DAX lost more than 2%.

The experts also do not forget the impact of the data, analysis and opinions expressed on the nature of inflationary pressures, on their persistence or transience. The official discourse, released from the Central Banks, advocates transience but numerous witnesses and more and more experts are putting the official theory into question.

Price pressures with traits of being persistent combined with a loss of economic momentum and an increasingly less optimistic global economic outlook pose an undesirable stagflation scenario. A nightmare for central banks.

Also the moments of glory of some investors will be nightmares with the passage of time, the excessive ambition combined with the harsh financial repression that is displacing and forcing prudent savings to buy risk assets, they are responsible for unfounded decisions based only on the market momentum and the blind faith placed on the FED’s asset reflation policies, finite factors.

When the markets finally correct and the necessary cleaning of the market takes place, the most exposed investors with the highest positioning in “growth” companies, promising projects and illusions but many without foundation, will suffer the consequences.

Observe the evolution of the percentage of companies that, being in losses, without having managed to earn money with their base business, have gone to the market through Public Offerings of Sale -OPV or IPO in English-.

About 80% of the IPOs launched on the market in recent months correspond to companies without profits, a percentage similar to that seen during the formation of the technology bubble in 2000. 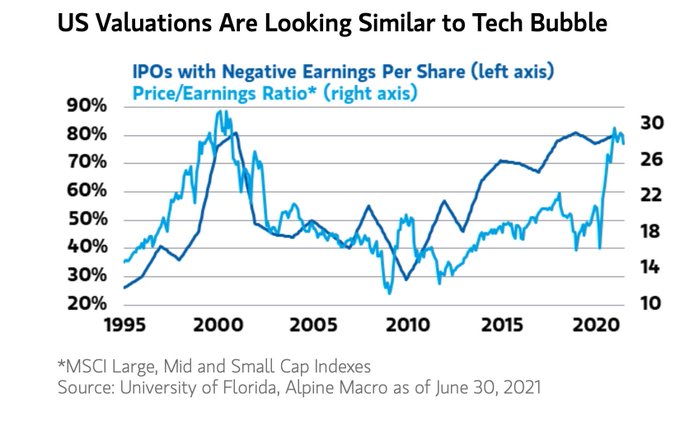 Precious metals play an important role in the investment world and particularly when uncertainty is high, especially when inflation and expectations rise.

In addition to the current uncertain economic environment, technical readings and development of the medium and long-term pattern of Gold and Silver, or general analysis according to indicators, seasonality or positioning suggest paying attention to the sector.

Interested in receiving more information on markets, charts, strategies … subscribe to the blog! for only € 0.89 / day (€ 80 per quarter). They will collaborate in its maintenance and will earn money with simple strategies and keys that we offer to invest.