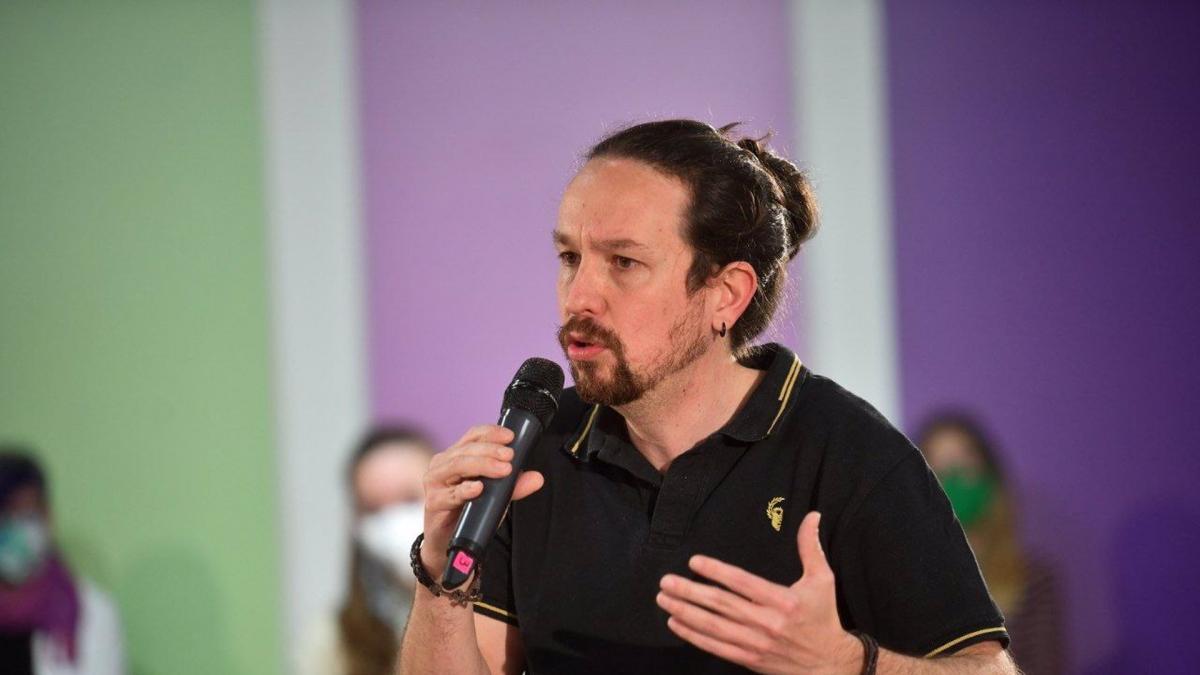 The candidate of United We Can to the elections of the Community of Madrid, Pablo Iglesias, has defended the need to regulate the rent to lower prices in the region, as it is a factor that favors the economy by increasing consumption in sectors such as small businesses and hotels; while claiming the policies undertaken for its political space in Barcelona or the Valencian Community.

This has been indicated for a act on housing policies In which the new Minister of Social Rights, Ione Belarra, the Mayor of Barcelona, ​​Ada Colau; the second vice president of the Government of the Generalitat Valenciana, Rubén García Dalmau; the spokesman for the purple formation and secretary of Civil Society and the Popular Movement of Podemos, Rafa Mayoral; and the members of the United We Can candidacy for the May 4 elections: Alejandra Jacinto and Carolina Alonso.

Specifically, and together with that regulation that they demand to be reflected in the new Housing Law, the obligation to dedicate the 30% of the apartments from new developments to affordable rent, the deployment of anti-eviction units or sanctions against banks and large owners that have a large volume of empty housing.

In his speech, Iglesias stressed that rents in Madrid are up 57% between 2015 and 2020 and that in 2019 families spent 55% of their salary to pay rent, which in the case of young people rises even to more than their entire salary.

The southern municipalities have the most expensive rent in Madrid

On the other hand, he has cited that seven of the 20 municipalities with the most expensive rents are located in Madrid and, compared to what one might think, they are not towns like Pozuelo but rather Móstoles, Alcorcón or Getafe, three of the main towns in the south of the region.

Therefore, it has emphasized the need to comply with the government agreement to regulate rent within the new Housing Law, a negotiation that continues “very much” the minister Belarra.

And it is that for the former vice-president of the Government to the right “it is extremely uncomfortable” article 47 of the Constitution that guides the access to housing as a right, which large property owners “fail to comply”.

But another reason to apply regulatory measures on housing is that these mechanisms work and has put the specific case of Barcelona, ​​to assert that the rental price has been lowered and it has been achieved that more housing appears. He has also appealed to an economic reason, since having lower incomes favors consumption and impacts on small businesses and the hospitality industry.

For this reason, it has charged against that “minority” that wants to maintain a structure of “absurd privileges”, which is inefficient in economic terms, in Madrid.

Belarra: “The fundamental battle is housing”

Meanwhile, Belarra has highlighted that housing is the “fundamental battle between those below and those above “, something that is glimpsed in Madrid, and has loaded against the “star measure” of applying tax incentives that defends both the real estate employer and the PP, which would support it in the new Housing Law.

Precisely a incentive system has been proposed by the PSOE in the negotiations on said regulations, something that the purple wing of the Government coalition rejects as it is a breach of the signed agreement between both groups, which includes regulating the rental system to put a ceiling on prices in stressed market areas.

📽️ @ionebelarra: “Anyone who defends tax incentives to supposedly reactivate the real estate sector is with the elites and with those who have been speculating with housing, considering it a market good and not a fundamental right.” # ViviendaDigna4M pic.twitter. com / oDTfuPC1V0

In fact, the Minister of Social Rights has criticized that, with tax incentives, “the usual winners” and is an “ineffective” measure designed for “elites” and “speculators”, who consider housing as “a market good and not a constitutional right”.

Therefore, Belarra has insisted that this model “goes against the spirit” of the government agreement when what is required is “once and for all” to end housing as “the great business of a few”. Consequently, he has encouraged Iglesias to vote to defend this right from Puerta del Sol, headquarters of the Madrid Executive.

In turn, the mayor of Barcelona has claimed that the city is a “benchmark” in this area by achieve “triple” investment that the State allocates to housing and duplicate that of the Generalitat of Catalonia. “It is the world upside down”, Colau has shelled to point out that, with fewer competences than the other administrations, they are building 2,000 apartments for social rent this year while the regional Executive promotes only 36.

To reach the levels of the public housing stock of other European countries it is required above all regulate the sector and ensure that publicly owned flats “are not privatized”, something that has not only done the PP but also “unfortunately” the PSOE

The councilor of the city of Barcelona has set as an example forcing new promotions to allocate the 30% of affordable rental housing and the use of right of first refusal, which makes it possible to match the offer made by large holders to achieve those floors that increase in public parks.

To this is added the creation of an anti-eviction unit that has managed to stop “thousands” of launches, a “titanic work” of which it is “proud”, and a “unit of discipline” in the face of a “savage market” that has allowed the closure of irregular tourist apartments, along with the opening of files sanctioning banks and large landlords for having their flats “empty”. Finally, he has asked to change the taxation because it is a shame” that the Socimi of “big speculators” do not pay just taxes.

For his part, García Dalmau has asserted that reverse “speculative policies“in terms of housing in Madrid it is possible, because in Valencia with the PP it was synonymous with” corruption “and now it is equivalent to talking about” dignity “.

In this regard, the vice president of the Valencian Community has explained that the public housing stock with the popular ones was “unworthy”, since went from 45,000 homes to 14,000 when they came to the regional Executive, in addition to having a debt over 200 million with families receiving regional aid.

Faced with this, the housing budget is up 420% in Valencia and have used the purchase of houses with the scoring mechanism, acquiring lots and that has even led to obtaining, at the price that large owners opted for, apartments for one euro, 29 or 1,000 euros, something that is “unworthy” because the affected families could have paid those figures.

On the other hand, and after also referring to the anti-eviction unit, García Dalmau has advanced that he has prepared a decree that will soon enter into force to mobilize 20,000 homes from vulture banks and funds, which in case of refusal will face sanctions imposed by the Valencian Community.

By way of conclusion, the activist Alejandra Jacinto has related that she joined the candidacy of United We Can when thinking about the affected by evictions and has committed that the housing will be the “roadmap” to guide the new Madrid Executive after the 4-M elections.