Home>Entertainment>“If they leave us” premieres in June: When? Time?

Univision announced that the melodrama “If We Are Left” is scheduled to premiere on Tuesday, June 1 at 9:00 PM ET. The soap opera stars the actors Mayrín Villanueva, Alexis Ayala and Marcus Ornellas.

After the success of “Amar a muerte”, the Venezuelan writer Leonardo Padrón returns with the adaptation of “Si nos nos deja”, based on the successful Colombian story “Señora Isabel” by Bernardo Romero Pereiro and Mónica Agudelo.

The telenovela ‘If we are left’ tells the story of Alicia (Mayrín Villanueva), “a woman who believes she has the perfect marriage and family. However, she discovers that Sergio (Alexis Ayala) has been unfaithful to her for years. A victim of her husband’s deceptions and disappointments, she makes the difficult decision to separate, rebuild her life and give love a new chance ”.

Univision’s new dramatic bet was produced by Carlos Bardasano and the recordings took place in Mexico.

The stellar cast of “If we are left” is made up of great actors such as Scarlet Gruber, Susana Dosamantes, Gaby Spanic, Isabel Burr, Álex Perea, Carlos Said, Isadora Vives, Lore Graniewicz, Mónica Sánchez Navarro, Roberto Mateos, among other great stars .

The Mexican telenovela will hit the screens of Univision to replace “Te Acuerdas de Mí”, a dramatic production that is currently in its final weeks of airing.

The Mexican actor Eduardo Yáñez had planned to be part of the leading cast of the melodrama “If they leave us”, but at the last minute he decided to cancel his participation due to health problems that affected his kidneys. Alexis Ayala replaced Yáñez in the production.

The young Mexican Elissa Marie (daughter of Gabriel Soto and Geraldine Bazán), will make her debut as an actress in the new Univision telenovela by playing the character of Sofía Guerra, the daughter of Martín Guerra (Marcus Ornellas).

Everything you need to know about the premiere of “Si nos deja” on Univision:

FREQUENCY OF TRANSMISSION: Monday through Friday at 9:00 PM Eastern Time.

WHAT THE STORY IS FOCUSED ON: “If they leave us” tells the story of Alicia (Mayrín Villanueva), a woman who believed she had the perfect life before discovering that her husband was unfaithful to her with a woman much younger than her. Faced with disappointment at Sergio’s (Alexis Ayala) infidelity, Alicia decides to end her marriage and start a new life.

CURIOUS FACT: The telenovela was recorded in its entirety in Mexico and will be broadcast in the United States before in the Aztec country.

PRODUCTION: The Venezuelan writer Leonardo Padrón was in charge of adapting the story of “If we are left”, while Carlos Bardasano is the producer of the melodrama that promises to conquer the Spanish-speaking audience in the United States. 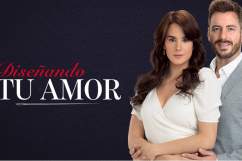