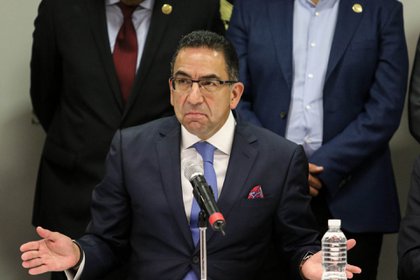 The news that the United States Attorney dismissed the charges against Mexican general Salvador Cienfuegos Zepeda for investigation in Mexico It generated immediate criticism from opponents of the Andrés Manuel López Obrador government.

The politician and lawyer Javier Lozano, who directed the Ministry of Labor and Social Welfare during the administration of Felipe Calderón Hinojosa, considered the news as a confirmation of his previous warnings on the lack of solidity in the case.

“I told them I was a pure mother and they called me everything. To swallow toads without making gestures, young people. Welcome back, General Cienfuegos, ”Lozano wrote on his Twitter account. 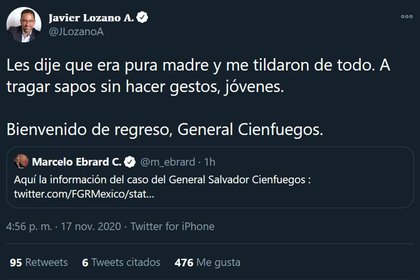 Lozano considered the news as a confirmation of his warnings about the lack of solidity in the case (Photo: Twitter / @ JLozanoA)

In mid-October, after Cienfuegos Cepeda was arrested, Lozano questioned the case because described as “implausible” the accusations of drug trafficking and money laundering that the US Attorney’s Office issued against the Mexican Commander. Lozano also considered that the Mexican president played a “painful role” by not demanding that the principle of presumption of innocence be respected.

That the president say that, regardless of the outcome of the investigations, the arrest of General Cienfuegos demonstrates the political degradation of the system and the neoliberal period is to pass judgment in advance, (it is) a summary judgment. And that. legally and ethically it is not worth

After the arrest in Los Angeles, California, of the former head of the Secretary of National Defense during the administration of Enrique Peña Nieto, Lozano was subject to criticism because a message that, just months before, addressed to Cienfuegos Cepeda on the occasion of his birthday: “Today is the birthday of my very Esteemed and respected General Salvador Cienfuegos Zepeda, to whom I send a big hug. Congratulations”.

Because of that message, the lawyer and former senator of the Congress of the Union got involved in a heated fight with the journalist and president of the Public Broadcasting System of the Mexican State Jenaro Villamil, whom he called an “idiot” for sharing the message. “Until the contrary is proven (presumption of innocence and due process), I reiterate my affection and respect to the General”Lozano insisted. 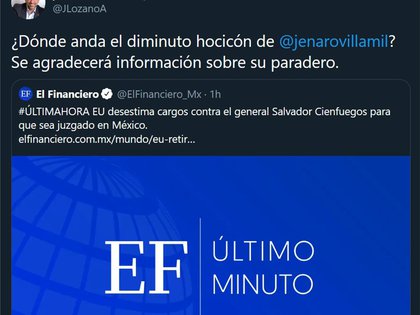 Due to previous questions about his relationship with the General, Lozano attacked the journalist Jenaro Villamil and called him “tiny snout (Photo: Twitter / @ JLozanoA)

This Tuesday, after the news of the withdrawal of the investigation in the United States was released, Lozano again attacked Villamil and called him “Tiny snout.”

The lawyer recalled that the Attorney General’s Office had clarified that in Mexico there is no open investigation folder against the General, “but the damage to the Armed Forces and the initial silence of its ‘Supreme Commander’, here is”He wrote on his Twitter. Lozano also shared the reflection of journalist Luis Cárdenas, who considered that it would be difficult for Cienfuegos to set foot in jail because “returns as a free citizen who was investigated by another country and in good faith dropped charges”.

Despite Javier Lozano’s optimism, the United States Attorney’s Office dismissed the charges issued in his country to collaborate with the Attorney General’s Office of the Mexican Republic so that this institution takes the case. According to the document issued by the Department of Justice, United States I provide Mexico with the evidence of the case and promised to continue cooperation for the investigation.

“Our two countries remain committed to cooperation on this matter, as well as to all of our bilateral law enforcement cooperation. As reflected by today’s decision, we are stronger when we work together and respect the sovereignty of our nations and their institutions. This close association increases the security of the citizens of our two countries ”, can be read in the document issued this Tuesday.

US Attorney’s Office dismissed charges against Cienfuegos; will be tried in Mexico

“It is an act of respect for Mexico and the armed forces”: Marcelo Ebrard explained why Cienfuegos will no longer be tried in the US

Cienfuegos case: US prosecutors want to keep part of the “Godfather” trial secret, but the judge wants to know why