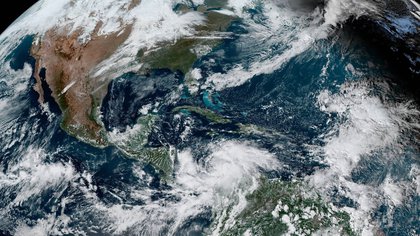 Satellite photograph provided by the US National Oceanic and Atmospheric Administration (NOAA) via the National Hurricane Center (NHC), showing the location of tropical storm Iota (i) in northern Colombia, at 14:10 local time (19:10 GMT) on November 14. . / NOAA-NHC

Hurricane Iota was gaining strength rapidly as it passed through the western Caribbean, and was expected to turn into a very dangerous Category 4 storm upon reaching the same area of ​​Central America that was hit a week ago by Hurricane Eta., another similar force system.

Evacuations were underway in low-lying areas of Nicaragua and Honduras near the border between the two countries, which seemed the likely place where the meteor would make landfall. On the Nicaraguan coast the winds and rain were already noticeable on Sunday night.

Iota became a hurricane early Sunday morning and quickly gained strength. It was expected to pass over or near the Colombian island of Providencia during the night. On Monday morning it reached dangerous category 3, and the National Hurricane Center of the United States warned that it could reach category 4 when approaching the Central American mainland on Monday night.

Iota was showing maximum sustained winds of 205 kilometers (125 miles) per hour early Monday morning. Its center was about 310 kilometers (190 miles) east-southeast of Cabo Gracias a Dios, on the border between Nicaragua and Honduras, and it was moving west at 17 km / h (10 mph).

Iota is already a record system for being the 30th named storm of this extraordinary Atlantic hurricane season. The rapid succession of meteors has drawn attention to climate change, which scientists say is causing wetter, stronger and more destructive storms. 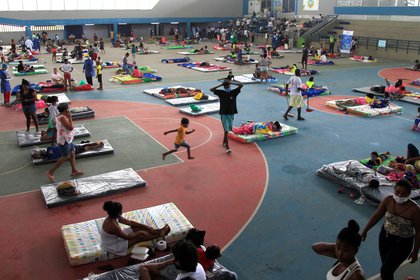 About 100 families affected by the floods caused by Hurricane Iota are taking refuge today in a shelter installed in the Coliseo de Combate de Cartagena, in Cartagena (Colombia). . / RICARDO MALDONADO ROZO

In Honduras, mandatory evacuations began before the weekend and by Sunday afternoon, 63,500 people were reported in 379 shelters in the northern area alone, although the entire country was on alert.

Nicaraguan authorities said that by late Sunday afternoon, some 1,500 people, almost half of them children, had been evacuated from low-lying areas in the northeast of the country, including all the inhabitants of Cayo Misquitos.. There were 83,000 people in danger in the area, according to authorities.

On Sunday night, strong winds and rains began to register in Bilwi, a coastal town in Nicaragua where residents rushed to markets and hardware stores to stock up on plastic covers, nails and other materials to reinforce their homes. same way they did when Hurricane Eta struck on November 3.

Several residents of Bilwi expressed concern that their homes will not resist Iota, so soon after the passage of Eta. Local television showed people being evacuated in wooden rafts with young children, dogs and chickens on board. 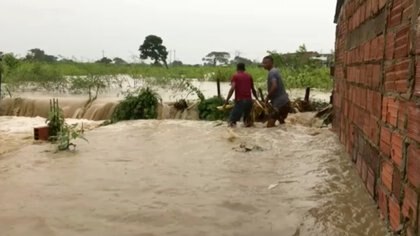 Disasters in Cartagena, Colombia, before the passage of the tropical storm. LUIS GUILLERMO FERREBUS / via REUTERS

Authorities warned the risk was high as Iota possibly made landfall in the same areas where torrential rains from Eta left the ground saturated, making the terrain more prone to landslides and flooding.

Eta wreaked havoc. IIt impacted Nicaragua as a Category 4 hurricane and killed at least 120 people after torrential rains triggered flooding and landslides in parts of Mexico and Central America.. It then passed through Cuba, the Florida Keys, and the Gulf of Mexico before making landfall again near Cedar Key, Florida, and moving through that state and the Carolinas.

Iota was expected to discharge between 20 and 40 centimeters (8 to 16 inches) of water in northeast Nicaragua, Honduras, Guatemala and southern Belize, with up to 75 centimeters (30 inches) in isolated spots. In addition, Costa Rica and Panama could experience downpours and possible floods, the hurricane center noted.

With information from AP

it became a hurricane early Sunday morning and rapidly gained strength. It was expected to pass over or near the Colombian island of Providencia during the night

Iota became a hurricane and threatens Honduras and Nicaragua