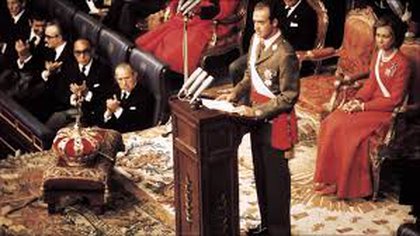 Coronation of Juan Carlos I as King of Spain November 22, 1975

The 45th anniversary of the proclamation of Juan Carlos de Borbón as King of Spain is commemorated this Sunday, November 22, in an unusual situation, with the protagonist out of the country and with a drip of investigations and news about his alleged businesses and opaque accounts that tarnish his legacy.

The Francoist Cortes witnessed, two days after the death of dictator Francisco Franco on November 20, 1975, the swearing-in ceremony of the new head of State with which the door to the path to democracy, known as the Spanish Transition.

It was a historic day for Spain. The cry of long live the king! resounded again in the Palacio de la Carrera de San Jerónimo – Current Congress of Deputies – 44 years after the proclamation of the Second Republic (April 14, 1931) and the departure of Alfonso XIII from the country began that long parenthesis for the Spanish monarchical institution.

“My great concern was: Franco died, how am I going to do it to establish democracy? (…) I will need a minimum of time for them to understand well what I intend to do ”, Juan Carlos de Borbón confessed to the Spanish writer José Luis de Vilallonga in the conversations that he collects in his book“ The King ”.

KEY FIGURE ON THE ROAD TO DEMOCRACY

And he himself reveals what Torcuato Fernández Miranda, his teacher, counselor and one of the main leaders of the Transition, told him about his concerns.

“Your first speech – he said – will be the key to all change, and in it you will have to say to the Spanish: this is what I intend to do and this is how I am going to do it.”

From the hand of that advice, Juan Carlos I prepared his first words as monarch wanting to make clear, as he has repeated on numerous occasions, that he wanted to be the king of all Spaniards.

The first words of Juan Carlos as King of Spain

Thus began 45 years ago a long and difficult path in which almost unanimously there was recognition of the work that the now king emeritus was carrying out, especially after the coup attempt on February 23, 1981, which he maintained Spanish democracy in suspense.

The praise and appreciation for their work were evident in the commemorations throughout the years from the date of its proclamation. 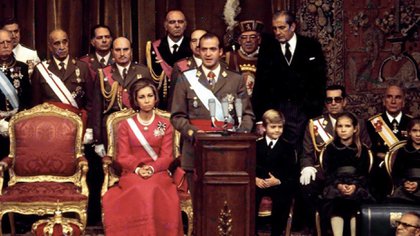 FROM PRAISE TO SUSPECT

In 2015, on the 40th anniversary of that ceremony, it was the current King of Spain, Felipe VI, who paid tribute to his father for having starred in a project of national harmony. Since then, events and news have been happening around the emeritus king that have led to the opening of three investigations by the Prosecutor of the Spanish Supreme Court. 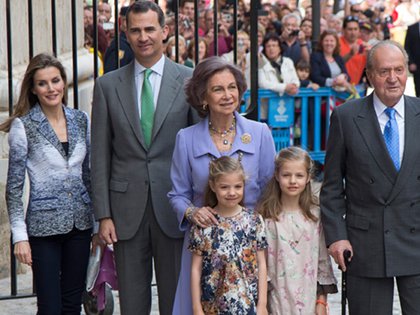 The first, about an account in Switzerland attributed to him and the possible collection of commissions for the high-speed train to Mecca, and the second, related to the use of opaque cards under another name.

They have been joined by a last avenue of investigation for an alleged money laundering after the Prosecutor’s Office received a report from the public body in charge of supervising and preventing this type of crime.

The investigations continue with King Juan Carlos outside of Spain since last August 3, when he decided to temporarily establish his residence in another country before the public repercussion of “certain past events” of his private life, and to provide Felipe VI with the tranquility and calm that the exercise of his functions requires.

Fourteen days later, the Royal House reported that, since that date, it was in the United Arab Emirates.

There you will be able to recall this Sunday the journey that began 45 years ago and that throughout the decades added almost unanimous applause that, without a doubt and given the evolution of events, you will long for at this time.

Rumors of infidelities and “the lesson” they learned together: Queen Elizabeth II and her husband Felipe celebrated their 73rd wedding anniversary

Dubai scandal: Princess Haya paid a fortune to her British bodyguard to keep her love affair a secret

25 years after the Lady Di interview that exposed British royalty like never before: the 15 most revealing points

Corinna Larsen and a scandalous revelation: “Juan Carlos was given a lot of female hormones to take away his strength”