Home>Tech>how to stabilize a plasma hotter than the sun

Scientists are already stroking with their fingertips the solution to what is undoubtedly one of the biggest challenges that raises nuclear fusion through magnetic confinement, which is the strategy that ITER (International Thermonuclear Experimental Reactor) has opted for.

As we have seen in other articles, the gas confined inside the reactor is extremely hot: nothing less than 150 million degrees centigrade.

This figure is impressive by itself, but it is even more daunting if we bear in mind that the core of the Sun reaches a temperature of about 15 million degrees centigrade, and its surface is “only” 5500 degrees centigrade.

We need our nuclear fusion reactors to be able to heat plasma, which is the extremely hot gas confined inside, well above the temperature of the Sun’s core because the pressure with which we work it is very inferior to the core of our star.

If we want the nuclei of deuterium and tritium, which are the two isotopes of hydrogen that must be introduced into the reactor, to acquire the kinetic energy they need to overcome its natural electrical repulsion and begin to fuse, it is necessary for the plasma to reach a monstrous temperature.

Precisely those 150 million degrees Celsius of which we have spoken. And, as we can guess, handle a gas at that temperature it’s not easy at all.

Plasma stabilization is one of the challenges that most concerns scientists

The technology that needs to be fine-tuned so that in the 60s (if we stick to the latest revision of the itinerary proposed by EUROfusion) they are ready the first power plants equipped with nuclear fusion reactors is very complex.

The challenges that need to be solved they are titanic, but little by little the researchers involved in this project are breaking down one barrier after another.

One of the biggest challenges requires finding new materials for the reactor mantle (known in English as blanket), a structure that lines the interior of the vacuum chamber and that has a critical role: to protect the vacuum chamber itself, the cryostat and the magnets from the direct impact of the high energy neutrons (14 MeV) that result from the fusion of the nuclei of deuterium and tritium.

The IFMIF-DONES project pursues precisely the development of new materials that are capable of supporting neutron radiation with minimal degradation. But this is by no means the only challenge we have to solve if we want nuclear fusion to come to fruition. 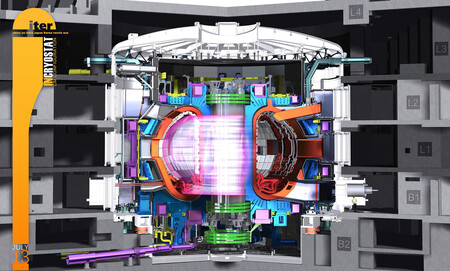 The mantle (‘blanket’) is in the first line of battle because it is exposed to the direct impact of the high energy neutrons resulting from the fusion of the nuclei of deuterium and tritium.

Another very important challenge consists in keeping permanently under control plasma fluctuations to prevent it from coming into direct contact with the mantle of the vacuum chamber.

A group of MIT researchers has been working on the development of a new superconducting material known as YBCO (Yttrium-Barium-Copper Oxide) for just over three years. combines yttrium, barium and copper oxide.

They propose to use it in the magnets of the reactor so that they are capable of generating a magnetic field significantly more intense than that produced by conventional magnets. This strategy should facilitate the stabilization of the plasma, and, in addition, could allow the construction of reactors 65 times more compact and notably more efficient.

Before moving on, we are interested in taking a small step back. When the plasma confined inside the reactor reaches the critical temperature and the deuterium and tritium nuclei begin to fuse thanks to the kinetic energy they have acquired, it arises as a result of this reaction. a helium core and the high-energy neutron that we talked about a few paragraphs above.

The neutrons have a neutral global electric charge, and, therefore, are thrown with great energy towards the walls of the container, where the mantle awaits them, which, as we have seen, is the first containment barrier. However, helium-4 nuclei, which they are ionized lacking electrons, and therefore have a positive electric charge, they remain confined by the magnetic field inside the plasma.

These nuclei are also known as alpha particles, and when they begin to appear as a result of the first fusion reactions between the deuterium and tritium nuclei, they become one more ingredient of the gas in which nuclear fusion is taking place.

Until very recently, scientists believed that when helium-4 nuclei began to give up their energy to the particle soup, their instability it would increase, so these disturbances could represent a problem that would need to be solved. 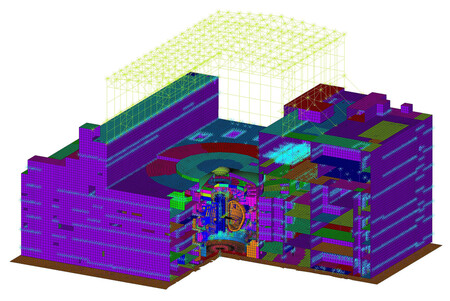 This recreation of the building where the ITER experimental nuclear reactor resides has been made with ANSYS software that facilitates the analysis of the structure using the finite element method.

The experimental nuclear fusion reactors available until now were not capable of sustaining the nuclear fusion reaction long enough to analyze the impact of the production of helium-4 nuclei. in plasma stability, but this landscape has changed recently. And it invites us to look to the future of this technology with optimism.

A group of European and American researchers has succeeded in using the tokamak ASDEX (Axially Symmetric Divertor Experiment) experimental reactor at the Max Planck Institute for Plasma Physics, located in Munich (Germany), to analyze the impact of helium-4 nuclei in the outermost layers plasma.

Their work has been published in the scientific journal Physics of Plasmas, and reflects that, unlike what they initially believed, helium-4 nuclei have a stabilizing effect in the soup of particles that make up the plasma. Furthermore, the production of these nuclei contributes to further increase the temperature of the gas, accelerating the generation of new helium-4 nuclei and increasing the net energy production.

There is no doubt that this is great news that, if finally consolidated, will represent a very important step forward in the effort to solve the challenge posed by plasma stabilization. There is still much left to do. Many challenges that must also be overcome. But it seems that with effort little by little we continue to advance towards a new way of obtaining energy that can take us hand in hand with renewable energies towards a more hopeful future.