Every day more people choose the so-called “active lifestyle” and start practicing some sport, such as running, playing paddle tennis or cycling. In the case of the latter, and despite the proliferation of SUVs, which already represent half of the sales of cars in our country, transporting the bicycle in their cars is a challenge, because in most cases it does not fit within them. It is therefore that from the official Twitter account of the Civil Guard they give us some recommendations to do it safely and according to the law, which we complement with the help of the DGT, and thus avoid falling into fines of up to € 200.

Are you taking the #FinDeSemana bike with you? Remember that transporting the bike inside the vehicle is very dangerous for the safety of the passengers. For a #ViajeSeguro use a bike rack, and where appropriate, the V20 signal. pic.twitter.com/jVn4HECC0s

How to safely and legally transport a bicycle in the car

The ideal way to transport a bicycle in the car is by doing it in the trunk, as with any other type of cargo. The problem is that it has dimensions that in practically all cases require fold down the seats to accommodate, and an incorrect disposition of the same and the fact of not securing it can turn it into a serious danger if we stop. In fact, on more than one occasion the DGT has warned of the importance of transporting cargo properly secured in the passenger compartment of our car, under € 200 fine. Therefore, if you choose to take the bike inside the cabin, do not forget secure with elastic hooks to the own rings that usually have the trunks of our cars, in addition to drive smoother and ahead of traffic to avoid such sudden maneuvers.

Incorrectly transporting a bicycle can result in a fine of up to € 200. 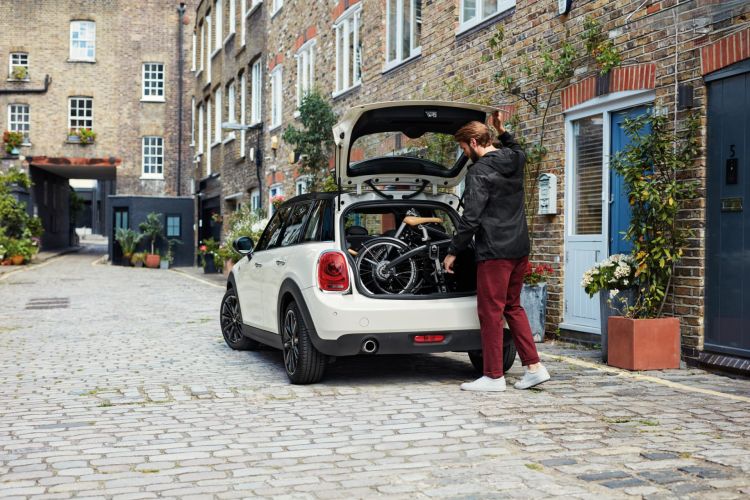 However, using a duly approved bicycle rack It is one of the best options, both for safety and comfort. On the one hand we meet the roof ones, in which the bicycles are placed on the roof of the vehicle. From the point of view of visibility and accessibility to the trunk they are the best, however, perhaps they are the least recommended. First of all, to load the bikes on the roof with some comfort requires that they be light, and secondly, noticeably affect driving: they considerably reduce the aerodynamics, increase consumption significantly, make the vehicle more clumsy when the center of gravity is raised and it is uncomfortable when increasing the overall height of the assembly, especially if you are going to access a car park or underpass.

On the other hand we find those of gate and those of hitch. In them load protrudes from the rear, so they share a series of obligations that you must fulfill, their greatest handicap being the fact that they reduce rearward visibility. Both differ in how they are attached to the vehicle, the former are made by means of a series of straps that are attached to the gate, so it is not necessary to have a tow ball, but once loaded, the door cannot be opened. trunk, and vice versa in seconds. 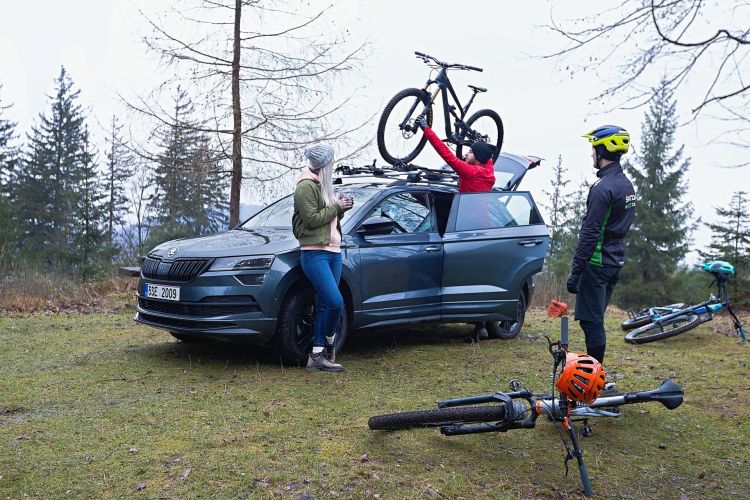 How to use a hatchback or hitch bike rack

To properly use a gate or hitch bike rack, in which the bikes protrude from the rear, it is necessary take into account a number of considerations if you want to save yourself a good upset in the form of a € 200 fine. To start with, as the load protrudes from behind (it cannot do so more than 15% of the vehicle’s length) it is necessary place a V-20 sign (50 x 50 cm square with red and white diagonal stripes). In addition, if the bicycles totally or partially hide the lights or license plate, it will be necessary to install a supplementary plate with them.

If you carry a bicycle rack in the back of the car, it is mandatory to use a V-20 signal (two if it exceeds the width of the vehicle without mirrors). 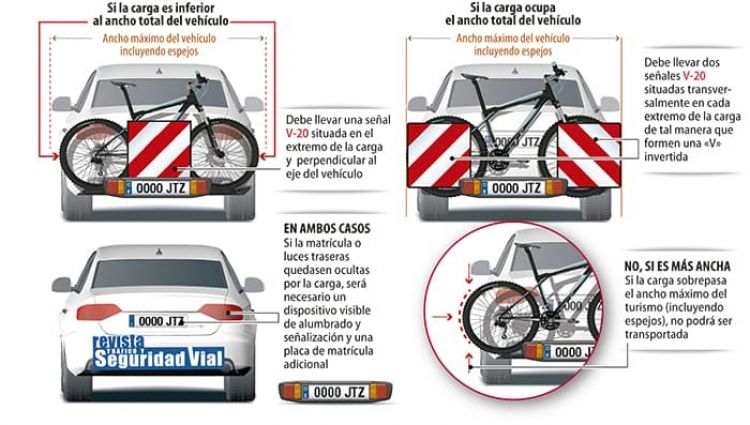 Likewise, it may also be the case that the length of the bicycle is greater than the width of the vehicle excluding mirrors, but lower if included. So, if it is on that fork it is possible to transport it, but it is necessary place two V-20 signals, one at each end forming an inverted “V”. However, in a car, If the load exceeds the total width including the aforementioned mirrors, it is totally forbidden to transport said load (In those destined for the professional transport of goods, this maximum is set at 2.55 meters).

In addition, as established by the General Traffic Regulations, in the event that the load protrudes from the rear, the V-20 signal must be complemented by a red light between sunset and sunrise, something that is already taken into account in the bike racks themselves that incorporate the complete set of supplementary lights and license plate.

– This is how cyclists should circulate on the road: what you should know as a driver and as a cyclist
– Attention, cyclists, wearing headphones on the bike has a fine
– Who has priority in a roundabout, the car, or the cyclist?
– How you should pass a cyclist with low visibility
– 21 DGT rules that every cyclist and every driver should know
– Dismantling myths: no, cyclists cannot ride on the road in peloton