Migbelis Castellanos, 26, born in the state of Zulia in Venezuela, is a television presenter who rose to fame in the United States after being crowned Nuestra Belleza Latina in 2018.

Since his triumph in the Univision beauty pageant, Castellanos has been part of special productions of the television network such as “Sal y Pimienta”, “Mira Quien Baila” and “NBL: El Reencuentro”.

With her charisma, genuine talent and sympathy, the Venezuelan star over the past few years has earned the love and respect of the Hispanic audience in the United States.

In the family sphere, Migbelis Castellanos has two brothers and a great part of his life he lived with his family in the city of Cabimas in the Zulia region of his native Venezuela.

Before entering beauty pageants, Castellanos dreamed of being a baseball player like her father, who was part of professional teams in countries like Venezuela and the United States.

Currently, the interpreter’s siblings are forging a professional career in the United States, an unexpected turn in their lives that has forced their parents to live between Venezuela and the United States, this with the purpose of being part of the moments most momentous of their children.

Here is more information about the brothers of Migbelis Castellanos:

Leonardo Miguel Castellanos is the older of the two brothers who are part of the Migbelis Castellanos family nucleus. Like her, he was born in the state of Zulia in Venezuela and has lived in the United States for several years.

The 27-year-old is a prominent baseball player who has been on top varsity teams like the Titans, Faulkner, Eagles and Keizer.

Leonardo Miguel is a graduate of Faulkner University in Alabama. During her graduation in 2018, Migbelis Castellanos was present and said she was very proud of her older brother’s achievement.

Through his official account on Instagram, Leonardo Miguel Castellanos often shares photos and videos of his strong training routines as he physically prepares to take on new professional challenges.

For the past several years, Migbelis Castellanos’ brother has been living in states like Alabama and Georgia while serving on local sports teams. However, Leonardo currently resides in Florida like his famed sister.

Passionate about physical training and baseball, Moisés Miguel Castellanos is the younger brother of Migbelis Castellanos.

The 19-year-old sportsman has a long career in the United States that is backed by a minor league contract he signed in 2018 with the Boston Red Sox, according to information reviewed by the Minor League Baseball website.

At present, Moisés Miguel is temporarily estranged from baseball. However, in a recent publication on his official account on Instagram, he assured that he hopes to return to the sport that he loves so much very soon.

In his facet as a baseball player, the younger brother of Migbelis Castellanos feels great admiration for personalities such as Félix Hernández, David Ortiz and Miguel Cabrera. 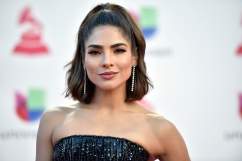