Non-plug-in hybrid cars are capable of carrying out part of their journeys with zero emissions, without using the heat engine. We carry out an exhaustive and demanding test to see how long they travel in 100% electric mode on a day-to-day basis.

How long does a hybrid go on electric?

If you are interested in buying a hybrid car or you already have one, this interests you. It is clear that sustainable mobility is becoming more and more relevant in our daily lives and in that sense hybrid vehicles play a fundamental role since they are the most frequent choice within eco cars.

Of course there are many types of hybrids (MHEV, HEV and PHEV) but I am going to focus on the most popular ones, the non-plug-in hybrids. That is, cars that have a combustion engine, an electric motor and a high voltage battery with which part of the journeys can be carried out in fully electric mode. And here is the key to the matter. In normal use, how long does a hybrid car run in fully electric mode?

For the test we have selected the most economical hybrid in the Toyota range, the Yaris Active Tech

Before answering that question, we are going to travel to 2019. At that time, Toyota Spain released a press release that caught my attention because it stated that around 80% of the time that a hybrid car circulated in the city it did so in zero emissions mode A very high percentage, right?

That claim was based on a study of the Polytechnic University of Madrid in collaboration with the Japanese manufacturer in which different urban trips were made with a Toyota Prius. In other European cities, other universities also did the same study with similar results. If you are curious on the Toyota Spain press website you can find the press release and even the full report of the Polytechnic University where you can see exactly the methodology that has been followed to carry it out.

This study that focused on city tours has inspired us to know what would happen in a much more varied use, that is, in normal use. At the end of the day, not only do you move around the city on a day-to-day basis, but you also travel on secondary roads and you also travel by motorway. So we wanted to do our own test but we have made some changes from the original study to take the data as realistically as possible making it more demanding and difficult. 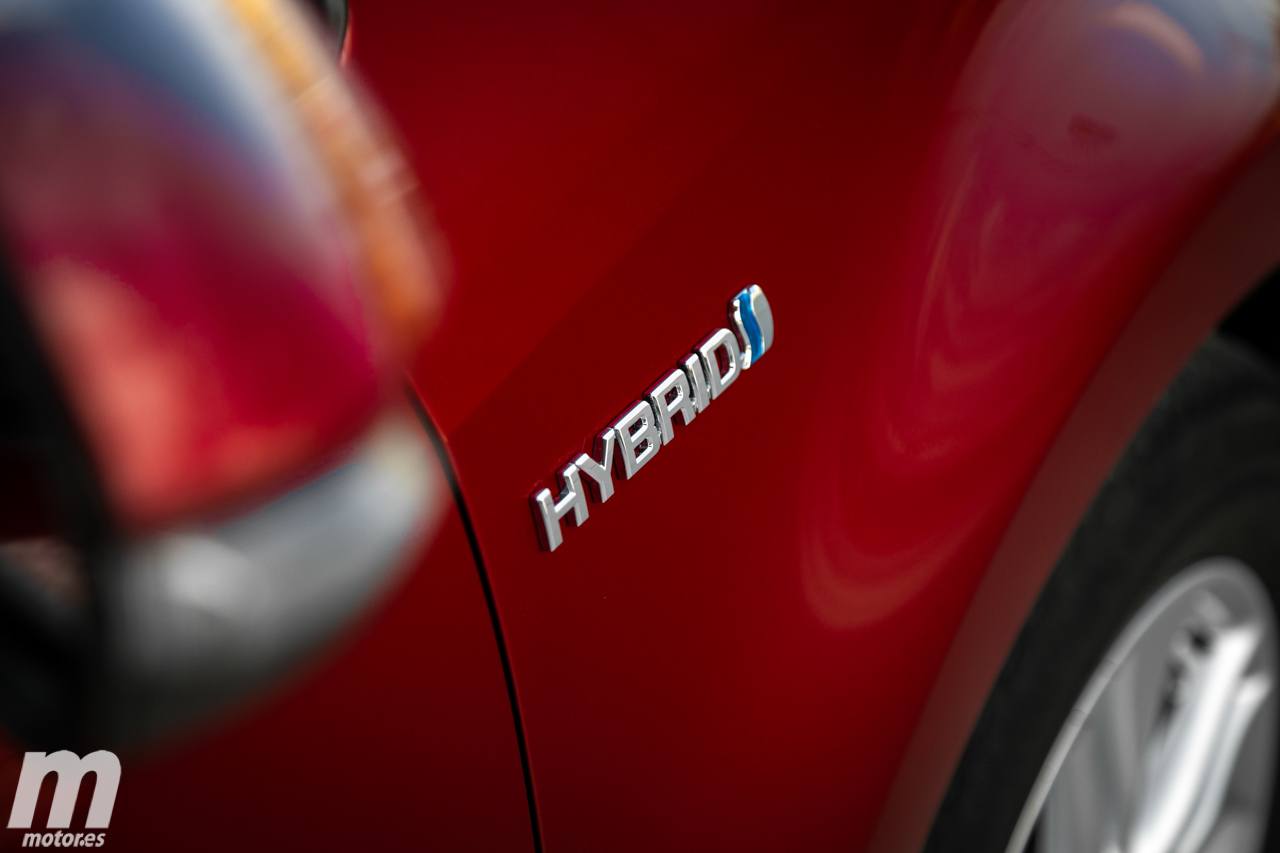 Toyota has been working with hybrid technology since 1976, and the arrival of Prius in 1997 marked the world’s first mass-produced hybrid.

To begin with, the study at the Polytechnic University used a Toyota prius fourth generation that is possibly the most efficient hybrid on the market and an icon of hybrids in general and Toyota in particular. We have chosen another less sophisticated model but we have looked for it within the Toyota range. At the end of the day they are the undisputed dominators in this type of vehicle because the vast majority of hybrid cars sold on the market are Toyota and therefore it is a very representative brand.

But we wanted to take the cheapest hybrid car that it has in its Spanish range, which is the Toyota yaris, a model that costs half that of a Prius and that is located among the most economical hybrids of the moment. Also the unit that we have driven has the access equipment called Active Tech. So we have the cheapest hybrid with the cheapest equipment.

We have added another additional difficulty and that is that we have carried out this test in the middle of winter. It has been quite cold in the days of January that we have tested the vehicle (most of the time between 0ºC and 8ºC) and that goes against the efficiency of batteries who prefer a moderate temperature for maximum performance. So the percentage of time in electricity will theoretically be somewhat lower than what would be obtained at other times of the year.

The car has been used for a little over a week and not only have we made urban journeys as in the original study, but we have made all kinds of journeys by city, by road and by highway. In total 60 journeys and almost a thousand kilometers going always at the same rate as the traffic around us, without exceeding the speed limits and at very varied times.

Most of the trips have been made only with the driver on board, although there have also been trips with occupants, even some in which the Yaris has gone with four people inside and the trunk full. Efficient driving has been practicedIn order to avoid intense acceleration and sudden braking, the ECO mode has always been activated and the air conditioning has been used when necessary. A normal use and within the reach of anyone.

The average consumption of the Toyota Yaris during the test was 3.5 l / 100 km

The app is called MyToyota And it is available for iOs and Android smartphones, it is completely free and any user of a Toyota vehicle, hybrid or not, can use it. It is quite useful because it has some remote functions and also shows relevant data about our journeys. 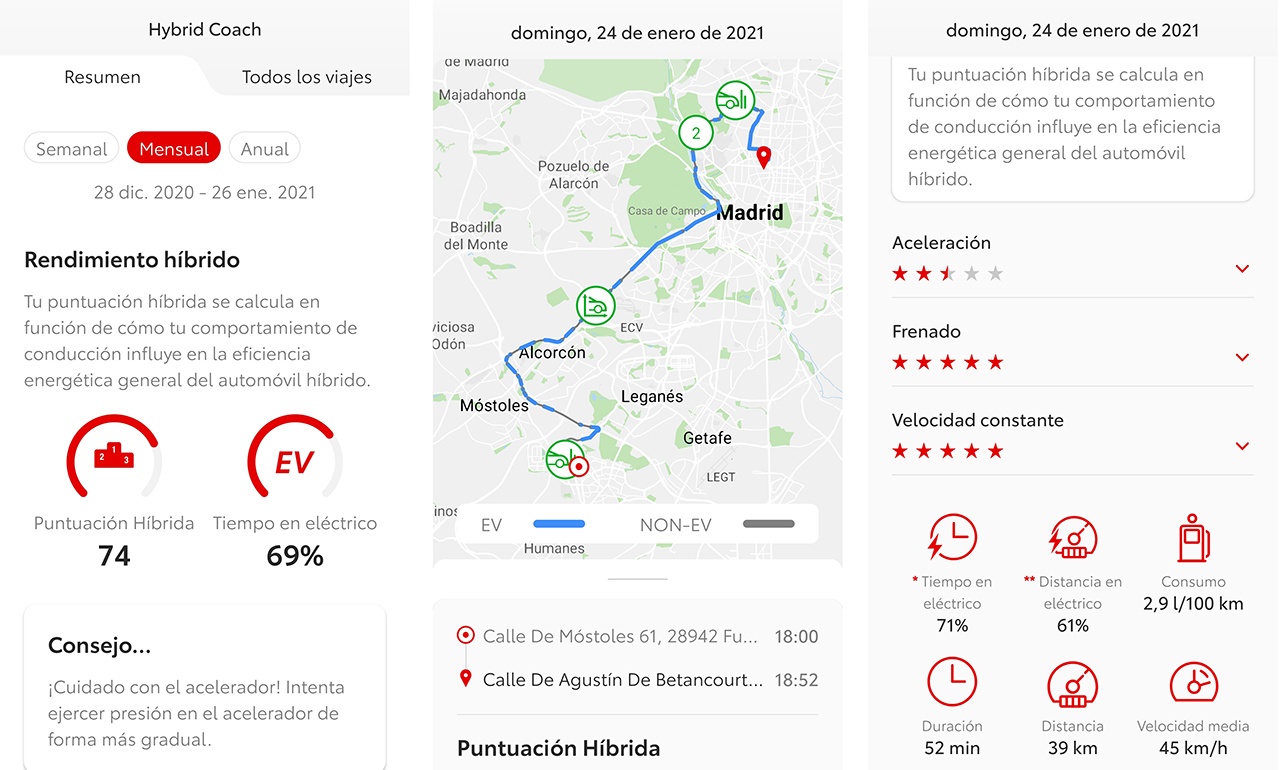 This utility of the mobile application is the one that we have used. Is called Hybrid Coach and shows the global results of the use of the vehicle and we can even see in detail each of the trips we have made and see on the map in which areas we have circulated in electric mode, the average speed, the distance, the consumption and the percentage of time in electric, among other data.

We have collected the information on each of the 60 journeys made that week and, to represent them in the most visual way possible, we have created a scatter plot. Each blue dot is one of the 60 routes. On the X axis, that is, below, you can see the average speed of each journey. On the Y axis, that is, the column on the left, the percentage of time in electric mode that has been achieved with each trip is shown. 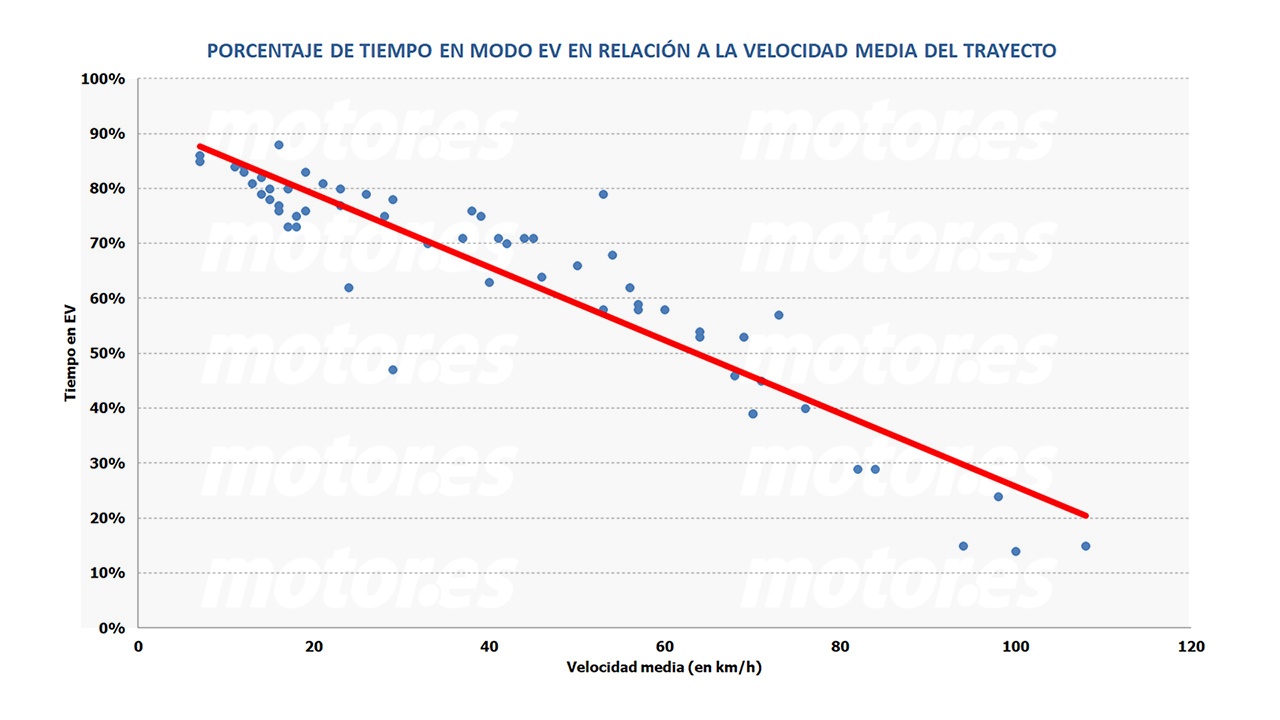 Of the variables analyzed, the one that affects the time in electric mode according to the Pearson correlation coefficient is the average speed of the journey

Visually we can already intuit that there is a very clear relationship between these variables and mathematics confirms that there is a strong correlation between both variables. To make it even more obvious we have added the trend line of these data, in red.

One moment. I was telling you that the average we have obtained is 69% of the time in electric mode and the original study spoke of 80%. Has the University lied to us? Has Toyota lied to us? If we stop to check the results that we have obtained on urban routes, which are those with a very low average speed, almost all of them are around the 80% line. Exactly what the Japanese manufacturer told us in the statement that we have taken as an idea for this study, so it is verified that this statement is true. Toyota is right.

We are going to look at the other end of the graph to see that when the speeds are high, the electric time drops. That is logical because to circulate at higher speeds it is necessary to use a higher dose of power And since the electric motor is not powerful enough to maintain that high rate by itself, it requires the combustion engine to act most of the time. But even so, it can be seen that although these average speeds are high, it is still around 20% of the time using only the electric motor, circulating with zero polluting emissions. 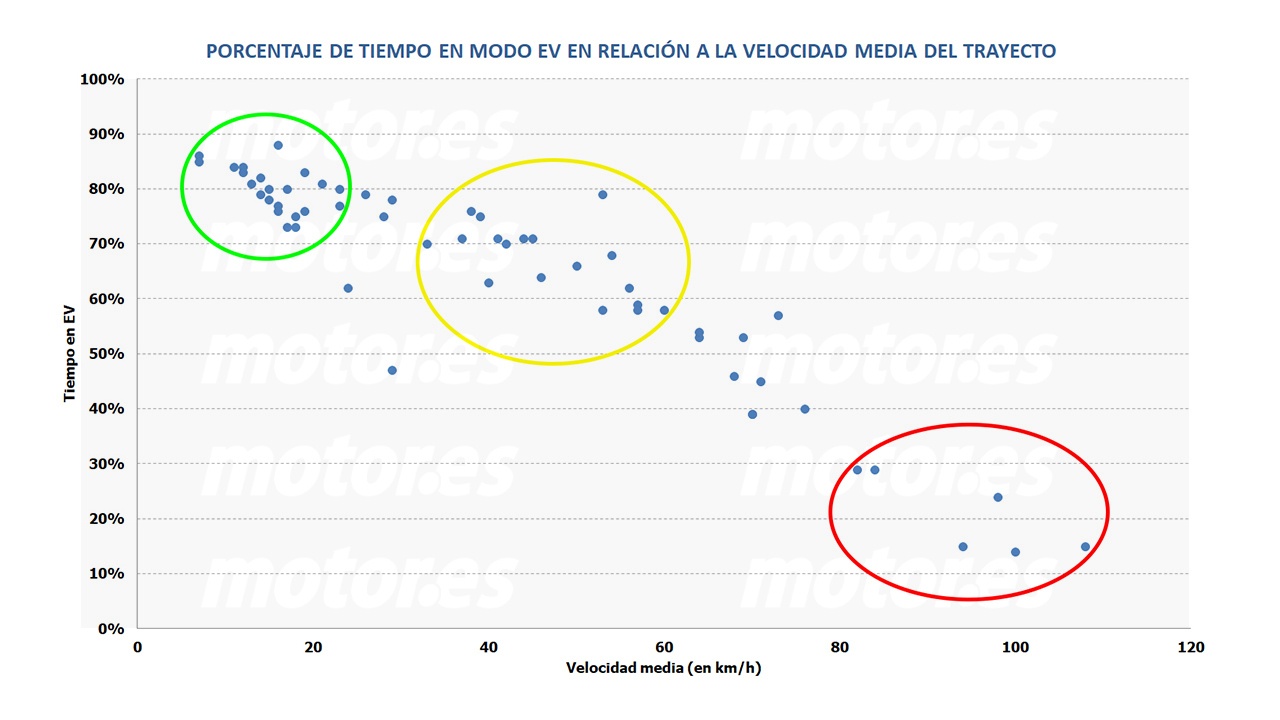 Marked in green mainly urban routes, in yellow the mixed routes with city and road and in red the journeys made mainly by highway

That has a lot of merit and is one of the things that is most surprising. Until not many years ago, hybrid vehicles beyond 50 km / h barely used the electrical part and that is why there is a tendency to think that hybrids work well in intensive use in the city but outside of it they are not a good option. That has already changed. Keep in mind that Toyota has been releasing hybrid cars for more than two decades and the evolution of this hybrid technology has made that claim history.

At high speeds at many times the electric motor supports the combustion engine, running both at the same timeSo that gasoline engine has to make less effort and therefore also consumes less. But not only that, but at certain times (on slopes or flattening at sustained speeds, mainly) it can move in 100% electric mode without resorting to the heat engine. Clearly, we can scrap the old-fashioned idea that hybrid cars are city-only.

Now let’s look at a specific part of the graph. A common type of movement that we all usually do when we take the car is go from one city to another. Therefore, there is a part of the urban route in the city of origin, then there is a journey by road at a higher speed and finally another urban route in the city of destination. The average speed of this type of trip is usually between 40 and 60 km / h. Those mixed journeys, routine for most people, are precisely the ones that are close to 70% of the time in electric mode, which is practically the average that we have obtained in this study. Therefore it is clear that in daily journeys a very large part of the time it goes into zero emission mode when driving a hybrid car. 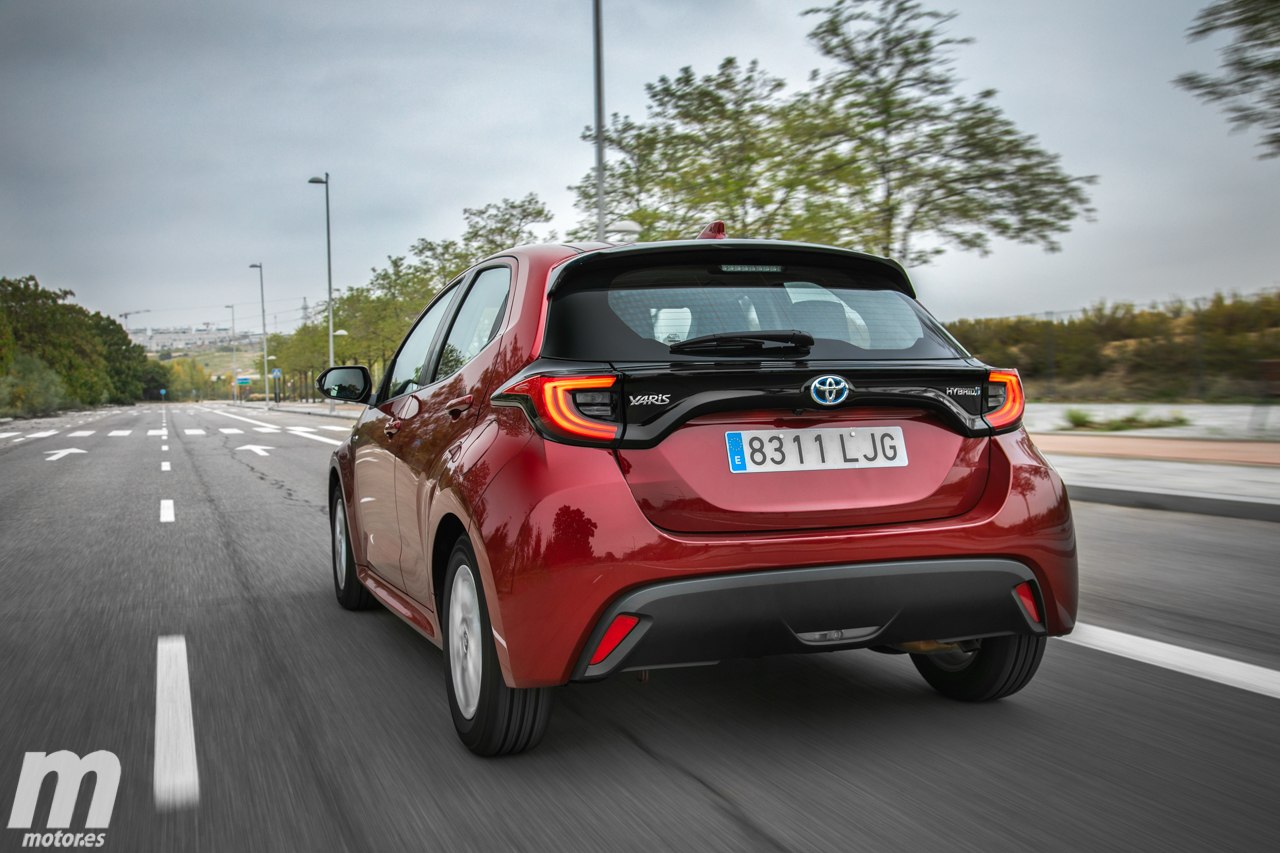 Confirmed: in the city a hybrid Toyota is able to circulate around 80% of the time without wasting a drop of fuel

It is surprising and commendable how efficient a current hybrid can be and more considering that we have put demanding conditions in this test. This opens up an interesting question: from an ecological point of view, it would be desirable for 100% electric vehicles to be used in sustainable mobility because they do not emit polluting emissions at any time. But electric cars have a series of limitations today, such as price, the need to have a charging point at home, the autonomy they offer and the availability of public fast-charging stations.

That makes you think that maybe a hybrid car is still the best option so far because it does not have to be plugged in at any time and has no limitations of any kind. They do not go all the time in electric mode but almost, they are not zero emissions but almost, it is not an electric car but almost. Therefore Does a hybrid car make more sense than a 100% electric car?