Microsoft announced the arrival of Windows 11, the next version of its operating system. And after this update, it’s time to give a new look to your office suite.

Available now to Insider-type users, Microsoft is working on a new visual update for Microsoft Office.

This graphical redesign shows a unified user interface in line with Windows 11. It also says goodbye to the Ribbon interface, first introduced in 2007.

Kori Loomis, program director of the Office Experience team, assures in a company blog that this visual update is based on user feedback.

The new look is based on the principles of Fluent Design, the Windows interface design language in force since 2017, and will be applied in due course to Word, Excel, PowerPoint, OneNote, Outlook, Access, Project, Publisher and Visio.

It should be noted that this visual update will be available for both Windows 11 and Windows 10.

How to activate it

Users who are part of the Beta channel can change the new look by going to the top right of the menu. In Word, Excel, PowerPoint, OneNote and Outlook, all you have to do is press the megaphone icon to display the “Coming” sidebar, where you can activate the graphical update.

Enough do it in one of these four applications so that the change occurs in all they. Currently not available for Access, Project, Publisher or Visio.

In addition to offering a “clearer consistency” with Windows 11, the new graphical version of Office makes the toolbar is hidden by default. 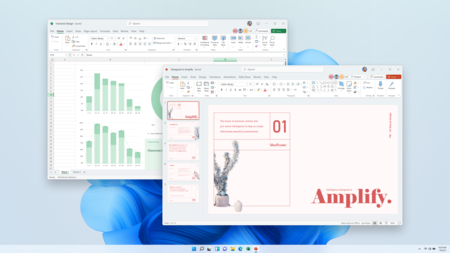 Microsoft assures that with this change it wants the interface is more simplified. To display the toolbar again, right-click on the top bar or the Display Options icon to select Show Quick Access Toolbar.

Microsoft also ensures that with this update it will be easier to collaborate with other members of a work team. On the one hand, the presence indicators are displayed in colors in the upper right corner of the menu bar. In addition, colors are also added to comments made in documents, making it easier, according to the company, to quickly find where these changes have been made.

Since it is still in beta and available only to Beta channel users, Microsoft advises that at this time the interface update has some bugs. 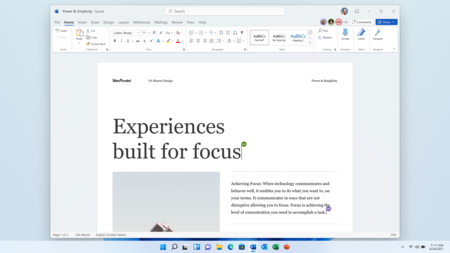 For example, it recognizes that there are color and style “inconsistencies” in the different surfaces of the user interface. Also, it warns that the animations in Windows 11 are not perfect, so the transitions are not entirely polished.

There is also another glitch in the shape and datatype preview gallery when the theme color is dark gray. Lastly, there is also a bug that makes the document title appear misaligned within the title bar.