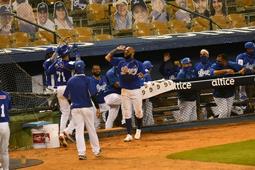 At this time, the Professional Baseball League of the Dominican Republic (Lidom), has officially suspended 5 games, but has gaps for holding them without extending the calendar.

The first game suspended was last Monday between Toros del Este and Estrellas Orientales, in the last third, which must be finished the next time the Bulls visit the Tetelo Vargas stadium and before the match of the date. That will be on December 7th.

There is also a suspended match between Licey and Toros, in La Romana, which can be held as part of a double day when the Blues visit that city.

The list now includes the games that Licey will suspend (Friday, Saturday and Sunday) in view of the fact that a group of its players have tested positive for the coronavirus. Today Licey would play in San Francisco with the Gigantes del Cibao, on Saturday and Sunday against the Stars, first in Santo Domingo then in San Pedro.

Lidom has on its calendar Thursday, sometimes Monday, as off dates for the reassignment of its games. He would also attend double games, which would be held at 7 innings, according to the regulations.

The regular series consists of 30 games and is scheduled to end on December 20. Then the play offs would come.

Public Health and Lidom issued a statement on Friday announcing several positives in Licey and the eventual suspension of their three weekend games, being able to return to action next Monday when they visit the Águilas Cibaeñas in Santiago.

In the networks, unofficially, the names of the possible affected by the Licey have been cited, in which it is indicated, the receivers Sandy León (Puerto Rican), Wellington Castillo, the outfielder Carlos Franco, the pitcher Cesar Valdez and Yasel Antuna.

The rumors of positive players in other teams have been latent, but the denials have also arrived, as the Eagles did this Friday.