The alleged detention of men who drank alcoholic beverages ended in a brawl, in the Santo Domingo neighborhood, in the Coyoacán mayorship.

The events occurred this weekend, when agents of the Secretariat of Citizen Security of Mexico City (SSC CDMX) attended a report on subjects drinking in the street. According to videos of the situation, at least 15 policemen, who detained a civilian, threw two others to the ground and exchanged pulling, kicking and shoving with 10 people.

The images disseminated on social networks recorded the moment in which eight policemen surround a man and four of them subdue him on the hood of a parked car. Seconds later, the civilian is hit on the head to subdue him and once on the ground, he is kicked

While this is happening, one of the victim’s companions approaches and claims one of the uniformed men. However, he is set aside so that he does not intervene and argue with the police.

“Don’t be hitting him, I’m recording it. Everything is abuse of authority ”, a woman is heard, who is supposedly recording the situation.

Spectators ask to note the registration of the official vehicles. One of them identified with the number MX 050-C1. At least four units were at the scene.

After several minutes, the first man hit is dragged to the patrol. He is reluctant to enter, so women and young people come to try to remove him from the authorities. When opening the door of the patrol, they pull the uniformed men and exchange kicks and blows. 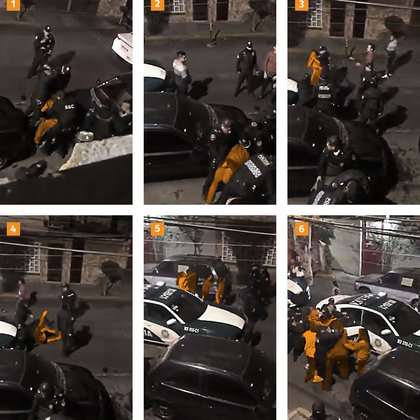 Elements of the SSC staged a fight in the mayor’s office of Coyoacán, Mexico City (Photo: Screenshot)

According to the SSC CDMX, the police elements had come after the report of people who ingested alcoholic beverages. The agency launched an investigation in the area of ​​Internal Affairs.

This year the Secretariat for Citizen Security reported that new protocols are being developed to prevent police abuse.

According to figures from the Second Report of Mexico City, 1,741 files were opened against police abuses, between August 2019 and July 2020. Of these, 1,464 were for unjustified absences, 76 for failing to pass the trust control evaluations and 201 came to Internal Affairs of the SSC for crimes of corruption.

The head of government of the country’s capital, Claudia Sheinbaum, has pointed out that the insufficient mechanisms for supervising police action, as well as the lack of a competitive and decent salary, according to the level of responsibility and risk implied by the security function, represent factors to promote acts of corruption, impunity and deterioration of the confidence of the citizens on the work of the uniformed.

Torture, extortion and abuse: this is how Borüs, an alleged elite police force of the CDMX, operates

They were in charge of the security of a hospital, but they were caught in an alleged sexual act: the video that surprised the CDMX Police