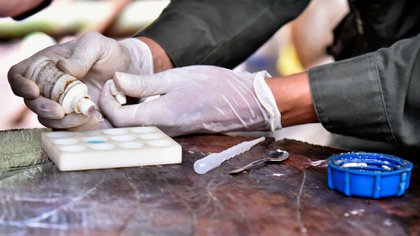 The Colombian authorities are continuing to eradicate drug trafficking. This time, the National Army and the Colombian Air Force destroyed a laboratory craft in which cocaine hydrochloride was processed.

According to the authorities, the laboratory was in La Balastrera, located near Jamundí, Valle del Cauca. Officials assured that this property was valued at at least nine million pesos and allowed the production of at least three tons of coca per month.

The operation discovered in the middle of the jungle at least eight wooden surfaces on which the alkaloid was produced and manufactured.

The purchase, sale and commercialization of these products in manufacturing and artisan laboratories allowed the gangs to finance themselves and strengthen their illicit actions in the region, which allowed them to attack the Army, the Police and the inhabitants surrounding the laboratory. The authorities classified the operation as a “Hard blow against drug trafficking in Valle del Cauca.”

The authorities implemented a plan against drug trafficking that several municipalities in the region are adopting, it is the Comprehensive Plan for Substitution and Alternative Development (PISDA), which is endorsed by the Interior and the National Government. This initiative in the department invested approximately $ 20,000 million, of which $ 13,000 million are delivered to peasants and the remaining $ 7,000 is invested in complementary works so that their territories become zones free of illicit crops. This project is expected to benefit at least 1,060 families from Valle del Cauca.