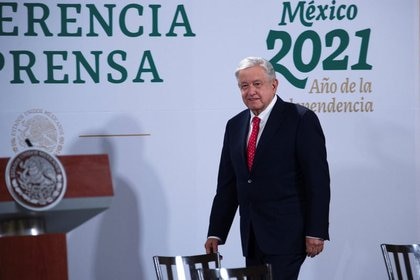 Archive image. The president of Mexico, Andrés Manuel López Obrador, attends a press conference in which he wished everything went well for the president-elect of the United States, Joe Biden, before his inauguration later in the day, at the Palace Nacional in Mexico City, Mexico. January 20, 2021. REUTERS / Presidencia de México / NEITHER RESALES NOR FILES

The talk, the first between the two leaders after the Democrat took office this week, occurred just days after a migrant caravan was dismantled in Guatemala after the Central American, Mexican and United States governments agreed to cut off their He passed.

“He was kind and respectful,” López Obrador said in a message posted on his Twitter account in which he reported the phone call. “Everything indicates that relations will be good for the good of our peoples and nations.”

The immigration issue was one of the most irritating during the term of Donald Trump. However, upon taking office on Wednesday, Biden reversed some of his predecessor’s anti-immigration policies as a controversial program that forced asylum seekers in the United States to wait on Mexican soil.

Since he became president of Mexico at the end of 2018, López Obrador has proposed to confront migration to the north by attacking the causes that generate it, such as poverty and violence.

However, little progress has been made in this regard, and each year thousands of Central Americans and Caribbeans undertake a long and dangerous journey across the isthmus and through Mexico in the hope of reaching the United States and living the American dream.

A few weeks ago, López Obrador said that he had a first contact with Biden – but he was still elected president. In that conversation, the Democrat commented that Mexico was responding to the coronavirus pandemic better than his country, said López Obrador.

According to a daily count by ., the United States ranks first in total number of deaths associated with the coronavirus, with almost 410,000, and Mexico fourth, with about 150,000.

Mexico City and Washington have recently collided over security and energy issues.

On Friday, López Obrador suggested that the US anti-drug agency, DEA, investigate how the file that led to the arrest of former Mexican Defense Secretary Salvador Cienfuegos was developed, a case that caused friction between the two nations.

In energy matters, López Obrador seeks to strengthen the state’s presence in the sector and his administration has clashed with foreign investors for measures such as restricting permits to private firms in the sector or threats to eliminate autonomous regulatory bodies.

On the eve, the Mexican president assured that there would be no changes in his energy policy.

The United States and Mexico not only share a huge border of more than 3,100 kilometers, but they are also great commercial partners. Both countries, along with Canada, are part of the TMEC, an ambitious free trade agreement that moves a flow of goods of 1.2 trillion dollars annually.