Isaac Okoro’s gift to his parents

This week the Draft of the NBA, the system by which franchises add promising youngsters, mostly from college basketball in the United States, to their rosters. Thus, year after year, a handful of dreamers fulfill their goal of reaching the most spectacular basketball league on the planet, but in turn many of them manage to get their families out of dire economic situations.

To contextualize it, it is necessary to understand that the first 30 of the 60 elected will agree on salaries that exceed a million dollars per season by a wide margin, so if they had any financial difficulty up to that point, it disappears immediately. Thus, many choose to spend their first income to help their loved ones.

One of the most outstanding promises of the Draft it was Isaac Okoro, pick 5 in the system, which will be added to the Cleveland Cavaliers and that after being selected, he surprised his parents with incredible gifts that no one expected. 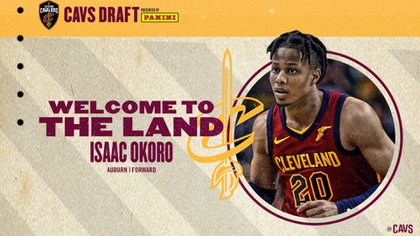 The 19-year-old showed up with a black Land Rover pickup with a red bow and handed it to his parents. Everything was recorded by the cell phones of his friends who were celebrating with him there and the funny thing is that at first his father did not understand what it was for him, until he asked and there he began to dance and jump.

But the vehicle was not the only surprise, but inside the trunk were bags with clothes, purses, shoes and accessories for him and his mother.

According to some specialized journalists, it is expected that Okoro sign a 4-year bond with Cavaliers worth USD 29.1 million, with USD 13.1 in guaranteed money. For this reason, this gift will not create a vacuum in your savings account.

Okoro He was born in Atlanta, Georgia, and began playing basketball in a tournament organized by the church and his good performances allowed him to get a scholarship to Auburn University, where he averaged 12.9 points, 4.4 rebounds and 2.0 assists per game. Their parents emigrated to the United States from Nigeria and in their new nation they raised their children.

Interview with Leandro Bolmaro, after making history in the NBA Draft: “I still have a hard time believing it, if four years ago I competed in athletics …”

The 30 chosen in the NBA Draft: Argentine Leandro Bolmaro will play in Minnesota Timberwolves