The President of Argentina, Alberto Fernández, He arrived this Monday at the “Benito Juárez” International Airport in Mexico City, after being invited by his counterpart, Andrés Manuel López Obrador. The president, accompanied by the first lady Fabiola Yáñez and her work team, was received by the Secretary of Foreign Relations, Marcelo Ebrard, and by the Argentine ambassador in Mexico, Carlos Tomada.

This morning, during the usual press conference since National Palace, López Obrador welcomed him and announced some of the activities that the Argentine president will have in Mexico.

“I want to welcome the president of Argentina, Alberto Fernández, who arrived very early today. Is our special guest for the commemoration ceremony of the 200 years of the proclamation of the Plan of Iguala. He will accompany us in Iguala on Wednesday, but he will also be with us tomorrow. I invited him and he agreed to be at this conference. He will join us in the morning tomorrow ”, AMLO said. 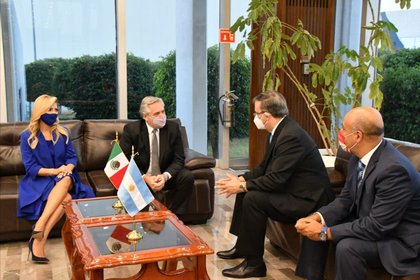 Fernández’s stay in Mexico will last until Wednesday night February 24th. During your visit also will hold working meetings with Mexican businessmen with investments in Argentina Y will attend the plant of the Mexican laboratory Liomont in Ocoyoacac, municipality of the State of Mexico, where doses of the vaccine against COVID-19 by AstraZeneca.

“Today he is going to have activities, he is going to go to a laboratory where vaccines are being packaged AstraZeneca, a laboratory that has collaboration with Argentina, it is an agreement that was reached with the University of Oxford and with pharmaceutical companies, also with foundations such as Carlos Slim’s ”, he added.

On the other hand, tomorrow, February 23, at around 6:30 p.m., President Fernández will have a meeting with the Head of Government, Claudia Sheinbaum, in the City Hall of the Mexican capital, where it will be declared “Distinguished Guest ”from Mexico City.

In the late afternoon, you will visit the Mexican Senate for a solemn session in his honor.