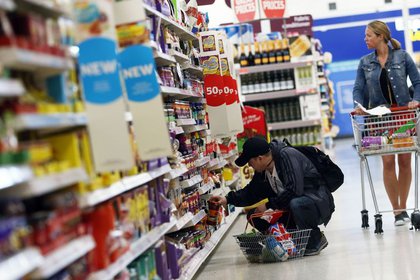 The acceleration of inflation is behind the increase in the “poverty line”. In October, the item “Food and Beverages” increased 4.8% REUTERS / Neil Hall

Half of the salaries of the formal sector of the Argentine economy are below the poverty line, says a report from the Institute for Social Development of Argentina (Idesa), based on data released during the last week by Indec.

“The poverty line is close to the average level of wages paid by formal companies; This means that many people, even having a registered private job, cannot get out of poverty ”, said this private study center linked to the Minister of Finance of Córdoba, Osvaldo Giordano.

This week Indec released the values ​​of the Total Basic Basket (which measures the poverty line) and the Basic Food Basket (which measures the indigence line). According to the official statistical agency, which is directed by the economist Marco LavagnaDuring the month of October, the poverty line for a family of four was $ 49,912 and the indigence line for the same family-type was $ 20,710 per month. The acceleration of inflation is behind the rapid increase in these thresholds. In October, retail inflation was 3.8%, but the item “Food and non-alcoholic beverages” increased 4.8 percent, “Clothing and footwear” increased 6.2%, and “Home Equipment and Maintenance” 4 , 5 percent. They are all items closely linked to maintaining the condition of “middle class.”

Regarding income, the Idesa report recognizes that there are “very heterogeneous situations”. In general, he explains, social risks increase when active members of the household are “inactive at work”, openly “unemployed” or have “low quality employment” in the informal sector of the economy, without retirement contributions or health coverage. But Indec data indicate that not falling into poverty has also become a challenge for those who have registered salaried employment, that is, in the formal or “blank” sector of the economy.

To make this comparison, the report uses the “median” data for formal wages. The “median” is not the average, but rather the level of wages that is exactly in the middle of a given income distribution. Below that figure is half of the cases and above the other half.

Thus, based on information from the Ministry of Labor and Indec, Idesa calculated that in 2000 the median registered private salary, updated to today’s values, was $ 43,000, while the poverty line for a family of four members was $ 37,000, also at current values. In this way, the “median” of the formal salary was 15% above the poverty line. 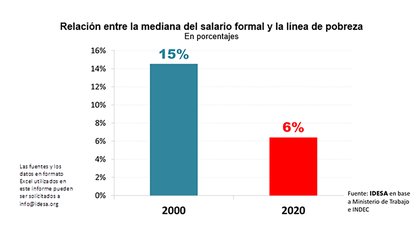 The bars show the percentage difference between the formal “median” wage, that exactly in the middle of the income distribution, and the poverty line.

Idesa then takes the formal median salary for the last month for which information is available, August, when its value was $ 48,000, while the poverty line for a typical family was $ 45,000. That is, the formal “median” salary was barely 6% above the poverty line.

Based on this, given the lag in information on formal wages and the rapid evolution of prices, reflected in the values ​​of the Total Basic Basket, the report affirms that half of formal wages are already below the line of poverty.

The data, says the report, “show that so far this century there has been a sharp deterioration in the purchasing power of wages in the formal sector. The phenomenon is associated with profound social degradation since it implies that, Even for workers who get a job in a formal company, the probability is high that their wages will not be sufficient to overcome the poverty line ”.

This is a first. “Traditionally, households were poor because their members of working age did not get a job (inactivity or unemployment) or only got a low-quality job (informal). With no or low income from work, it is very likely that a family will not have an income above the poverty line. But with the deterioration of the purchasing power of formal wages, what is happening is that, even with a formal salaried job, the income is not enough to get out of poverty ”, The report says that it qualifies as “serious” the connotations of the phenomenon, since the search for or obtaining formal jobs loses relative attractiveness with respect to social plans.

The underlying reason for this picture is not the behavior of formal employers, but the loss of productivity. “The general drop in the standard of living of the population and, in particular, the higher incidence of poverty, is a consequence of the fact that less and less goods and services are produced per person. The correlation is that it costs each person more to get these goods and services, ”says a passage from the report.

According to Idesa, “when low productivity is so massive, welfare can provide palliatives, but never solutions.” The only way out of the trap is to increase productivity and real wages, for which it is essential to encourage private investment and for the public sector to prioritize investment in infrastructure and in human capital and education. “This requires – he concludes – a comprehensive and profound reform of the State.”

The Government is closely watching the course of inflation, while maintaining its decision to cut the fiscal deficit in 2021