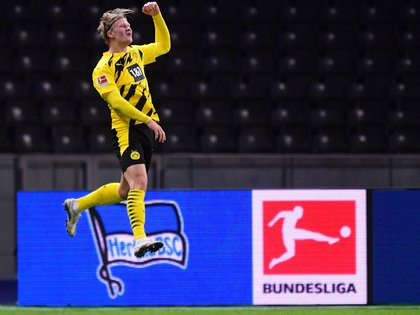 Sports writing, Nov 21 . .- A poker scorer by the Norwegian Erling Haaland, recently chosen as ‘Golden Boy’ (best young man of the season), woke up Borussia Dortmund, who came back from the initial goal of the Brazilian Matheus Cunha to beat in Berlin to Hertha (2-5) and become the main threat to Bayern Munich.
The Swiss Lucien Favre’s team was the great beneficiary of the session. Dortmund took advantage of the setbacks of Bayern, in the Allianz more than eight months later, against Werder Bremen (1-1) and Leipzig in Frankfurt against Eintracht (1-1).
Thus, the eighth date will end as second in the table, one point behind the champion, on the day that the young Youssoufa Moukoko debuted, aged sixteen, the youngest player to debut in the Bundesliga.
It was a new exhibition from Haaland that celebrated the designation of ‘golden boy’ in a big way, with four goals, of all kinds and of all colors.
And that the Berlin team took advantage of the bad start to the Borussia match to take advantage thanks to Cunha who, from outside the area, sent an impossible missile for the Swiss goal Roman Burki.
Everything changed after the break. The departure of the Favre and Haaland team was brilliant. The Norwegian equalized by completing a pass from the right from Emre Can in the 47th.
Three later he put his team ahead when he received a pass into the hole from Julian Brandt. And at game time he finished a counterattack after dodging goalkeeper Alexander Schwolow. The fourth was signed by the Portuguese Raphael Guerreiro, who took advantage of a commotion in the small area to mark the fourth.
A penalty converted by Cunha made up the score for Hertha in the 79th minute but right after, Haaland picked up a pass from England’s Jude Bellingham to control the ball and overtake Schwolow for the fourth time in the match.
The Norwegian already stalks the scoring dictatorship in the Bundesliga of the Polish Robert Lewandowski. Haaland, who has ten in eight games played, is one behind the Bayern forward.
Five minutes from the end, Favre chose to make his debut for Moukoko. The young and promising forward replaced, precisely Haaland, and rounded off Borussia’s magical night.