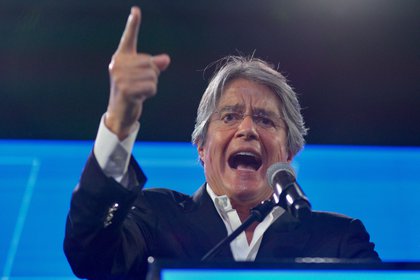 Former banker Guillermo Lasso and correista Andrés Arauz and have gone to a second round in the presidential elections in Ecuador, according to the preliminary official results announced this Sunday, reported the National Electoral Council, although the candidates can still file some appeals.

According to the scrutiny, Yaku Pérez, from the Pachakutik movement, reached 19.39% (1,797,445), which takes him away from Lasso by 32,600 votes, the CNE indicated in a results proclamation session that it suspended this morning after revealing the preliminary official results of the presidential elections on February 7.

Once the figures are proclaimed, The CNE specified in a statement that “the presidential pairings that go to the second round of elections on April 11” are that of the Union for Hope Alliance and the CREO-Social Christian Party alliance. 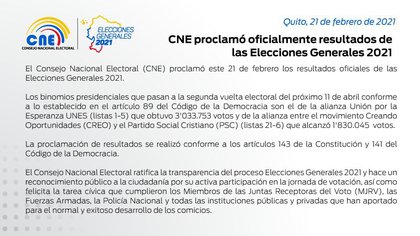 Ecuador’s CNE confirmed that Lasso went to the ballot

After the announcement of the results this Sunday, the political organizations will be notified and the stage is open to present different appeals, such as challenges or appeals.

The count was approved with the vote of four of the five members of the electoral body present at a meeting, which was reinstated on Saturday and lasted until early Sunday morning.

The winner of the ballot will succeed Lenín Moreno, ex-ally of Correa and whose four-year term will end on May 24.

Pérez, a 51-year-old environmental lawyer, maintains that a right-wing fraud marginalized him from the ballot after being displaced by Lasso from second place during the preliminary vote, for which he has unsuccessfully raised a vote count with the CNE.

“Three days (from the preliminary scrutiny) we were in second place and on the fourth day they already put us in third place, that’s fraud”, said the indigenous leader on Saturday in the Andean town of Riobamba (south).

Pérez could insist on his request in a challenge phase that by law the CNE will open from the promulgation of the results of the presidential election on February 7, in which 16 candidates participated. 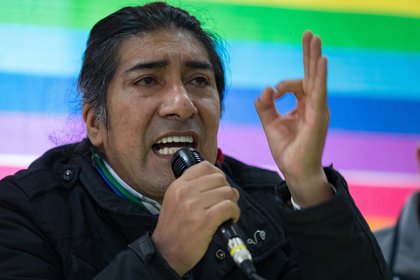 “I will continue representing them in this second electoral round”Lasso said in a statement after the proclamation.

Added that “Today democracy has triumphed, we are going with courage and optimism to this second round.”

The centrist Xavier Hervas was placed fourth with 15.68% of the vote and the other applicants – including the official Ximena Peña, the only woman – captured support that reaches 2%.

Lasso, a 65-year-old conservative, leads the opposition to Correa, who beat him in the 2013 presidential election.

In addition to the confrontation between the left and the right, “the correísmo-anticorreísmo struggle is coming,” political scientist Esteban Nichols, from the Universidad Andina Simón Bolívar in Quito, told ..

For the former banker, who is running for office for the third time, “the toughest election is coming, he must seek alliances with antagonists” such as the parties that sponsor Hervas (Democratic Left) and Pérez (Pachakutik, political arm of the indigenous movement) Nichols added.

Arauz, Correa’s former minister, did not manage to win the presidency in the first round as his leader did in 2009 and 2013, for which he needed at least 40% of the votes and ten points of difference over his immediate follower.

Nichols maintained that Arauz captured the electorate of the former socialist ruler, who has lived in Belgium since he left power and was sentenced in 2020 in his country to eight years in prison for corruption.

“By itself it does not generate a vote. People voted for Correa ”, said the expert. 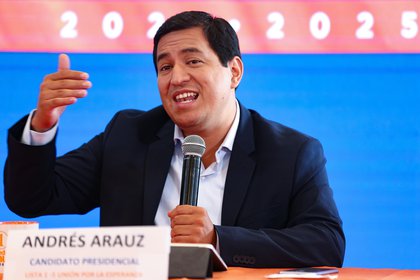 The correista candidate for the Presidency of Ecuador, Andrés Arauz

– To recover the votes –

To defend Pérez’s vote, whom a quick count by the CNE placed second on the day of the election and thus remained in the first days of the slow preliminary scrutiny, indigenous groups held peaceful vigils in front of the CNE headquarters in Quito.

The aboriginal leader insists on being the victim of a fraud, so on Wednesday indigenous people began a “march for democracy” in Loja, to the south and near the border with Peru, with the intention of reaching the Ecuadorian capital next Tuesday .

“Unfortunately they try to deprive us of our votes”Perez told supporters on Saturday in a town in the province of Chimborazo (southern Andean), where the walk he leads arrived.

He added that before the pretense of “snatching and stripping us” of the votes, next Tuesday to Quito “we are going to arrive rivers of people, rivers of hearts to say that our vote is defended, our vote is not stolen. The votes must be recovered ”.

The delay in the announcement of the results and the tightness of the vote between Lasso and Pérez, both opponents of each other and of Correismo, led the UN and the OAS to demand “transparency” in the vote count.

The Comptroller’s Office of Ecuador asked the CNE on Saturday to allow it to carry out an audit of the electoral computer system before the ballot to “guarantee the necessary transparency, legal security, legitimacy, proper use of public resources and contribute to the generation of an environment of trust.” .

In the February 7 elections, the 137 members of the National Assembly were also appointed, without any party having achieved a majority. Correísmo will be the main force with about fifty seats

(With information from AFE and .)

The national indigenous march advances towards Quito to demand the counting of the votes in Ecuador Elections in Ecuador: the trend was reversed, and now Guillermo Lasso surpasses Yaku Pérez in the race for second place